Cristiane Justino was standing in the front row for this UFC 208 main event and it is unlikely anything she saw will worry her as much as the outcome of her doping violation.

Germaine de Randamie was crowned the UFC's first featherweight champion in the women's division. Dropping to her knees in the Barclays Centre after being handed the unanimous decision against Holly Holm, the first thing the new champion will have heard was the sound of indifference. And doubt.

A first defence against Cyborg is already in doubt as the 32-year-old Dutch kick-boxer revealed afterwards that she may require surgery on her hand.

Holm has now lost three on the spin since making history and becoming the first woman to beat Ronda Rousey back in November 2015. However many believe 'The Preacher's Daughter' was unfairly treated by the judges on Saturday night, as they failed to punish De Randamie for not one but two late blows after the end of the second and third rounds. 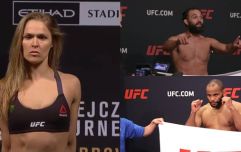 21 of the most shocking weigh-in moments in MMA history

END_OF_DOCUMENT_TOKEN_TO_BE_REPLACED

The second incident prompted a talking-to from the referee, but she escaped without more serious sanction - a sanction that could have proved pivotal in a bout that was scored 48-47 across the board.

"It was in the heat of the moment. I apologised," said De Randamie afterwards of the blows you can see below.

Many fighters watching on were unimpressed with both the blows and the officiating.

That punch at the end 😱

You get the feeling Cyborg will have been unperturbed by what she has seen from the new 145lb champ.

popular
Multiple fatalities after planes collide mid-air over airport
Andrew Tate banned from Instagram and Facebook
Incredible case of the only known individual whose parents were two different species
Footage emerges of Andrew Tate getting knocked out during kickboxing bout
The JOE Friday Pub Quiz: Week 308
Court hears cringeworthy poems Ryan Giggs wrote to his ex
Rishi Sunak names his usual Maccies order - but it was withdrawn more than 2 years ago
You may also like
Sport
Cyborg vs Holly Holm title fight booked for UFC 219
Sport
Eddie Hearn reveals the one fighter he would allow to compete in crossover fight
Sport
UFC's latest champion unfairly being blamed for title fight controversy
Sport
Remember that time that UFC 208 headliner Germaine de Randamie knocked out a male opponent
Sport
UFC champion Amanda Nunes changes her tune about moving up after a certain knockout artist leaves equation
Next Page