Watch: Rafael Nadal cracks his head on a Wimbledon doorframe during warmup

That time of the year when British people with absolutely no interest whatsoever in tennis pretend to like the sport for a couple of weeks. 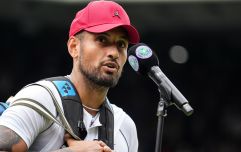 END_OF_DOCUMENT_TOKEN_TO_BE_REPLACED

In fact, we're relatively confident that the majority of the people that are bothering to read this bit aren't remotely interested in who wins the men's singles crown this year. Nope, instead, most of you are probably only here because you want to see Rafael Nadal - one of the finest players of his generation and a Wimbledon champions in 2008 and 2010 - crack his head on a doorframe.

Nadal faced Luxembourg's Gilles Müller on Monday for a spot in the quarter finals. Prior to walking out on Court Number One, BBC cameras picked the Spaniard going through his normal pre-game routines.

He fiddled with his shoe laces; he adjusted the height of his socks. Then, having picked up his racket, he attempted to leap in the air. Unfortunately for him, he chose to do this while standing beneath a doorframe. Just listen to the noise it makes...

That's not the warm-up #Nadal had in mind.

At least he saw the funny side of it!#Wimbledon pic.twitter.com/g27qZb7VI7

Although he managed to laugh it off, Nadal went on to lose the opening two sets of the match.