This man is living his best life

Imagine being Diego Maradona. Imagine being idolised by an entire nation, being the captain to lift that nation's only World Cup, and having a tonne of money to jet around the world in, doing shots of tequila and other fun activities. 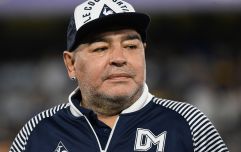 END_OF_DOCUMENT_TOKEN_TO_BE_REPLACED

It would be decent, wouldn't it? You'd live that life to the full. And that's exactly what Diego Maradona is doing, in case you hadn't noticed.

We've seen the full spectrum of emotions Maradona is capable of expressing during this tournament. Those emotions include: despair, and jubilation.

After Lionel Messi's opening goal this evening, we saw the Argentine icon explode with joy. But before the game, Maradona's spirits were clearly very high, as he was seen dancing with a Nigeria fan in the stands.

You wouldn't think this is arguably Argentina's biggest game of the season, Maradona's dancing with fans 😂 #WorldCup pic.twitter.com/58Jzttlda3