Diego Maradona is a man of eccentricities. Every day presents a different side of the man, each of which tends to be unusual, exciting, bombastic and hilarious. 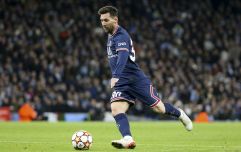 Evra bizarrely congratulates Messi for winning Ballon d'Or, despite winner not being announced

END_OF_DOCUMENT_TOKEN_TO_BE_REPLACED

During Argentina's World Cup match against Nigeria on Tuesday, the camera did exactly that, mere seconds after Lionel Messi opened the scoring with a stunning effort.

Messi received the ball from long down the field and, with consummate ease, took a touch on his knee and rifled the ball into the net.

Cue Diego, who was standing in the crowd celebrating in a manner which can best be described as "utterly and entirely possessed".

Maradona, as can be seen above, crosses his hands over his chest, looks up to the Lord above and speaks some words to the bid dawg upstairs.

All throughout he maintains a steadfast stare and appears to reverberate with pure, unadulterated joy, as well as a touch of anger perhaps.

If nothing else, he has shown us that we all need to work harder at our goal celebrations. Each of us.

That face you make when you get to work and someone in the office brought donuts. #ARGNGA #WorldCup #Messi #Maradona pic.twitter.com/ZTUggGTu2A

popular
Shaquille O'Neill shows incredible body transformation and 'first six-pack for 30 years'
YouTuber posts video telling fans 'I'm not dead' - dies days later
Man chops off two fingers in mission to become fully-fledged 'black alien'
Woman left mortified after realising why postman ‘rudely’ chucked parcel through door
Dad claims toddler stayed up until 11pm after cafe accidentally put coffee in babycino
You can now get paid £150,000 to let a robot use your face and voice
Harry Kane makes classy gesture to Spurs fans after 34-hour journey to cancelled game
You may also like
Sport
Argentina boss insists they are 'within their rights' to call up Messi despite PSG anger
Sport
Gerard Pique told Barça president 'nothing bad would happen' if Messi left
Sport
Lionel Messi: I want to return to Barcelona after PSG contract expires
Sport
Mauricio Pochettino explains why he hooked Lionel Messi at half-time
Sport
Gini Wijnaldum doesn't have support of South American players at PSG
Next Page