Chris Froome punches a spectator who starts running next to him

That's one way of clearing the road.

Chris Froome lost his patience with an annoying fan at the Tour de France. The Team Sky cyclist, who won the stage stage eight of the competition, and claimed the yellow jersey in the process, punched a man decked in all yellow. 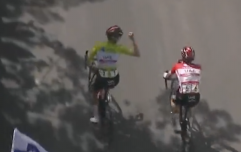 END_OF_DOCUMENT_TOKEN_TO_BE_REPLACED

Wearing a Colombian football jersey, and carrying the country's flag, the spectator was running alongside Froome and got too close to the cyclist for comfort.

Froome landed a sharp punch on him, stopping the spectator in his tracks.

And from another angle.

popular
Metallica finally reacts to Stranger Things 'Master of Puppets' scene
Jake Paul is finally fighting a proper boxer as Tommy Fury replacement
Nadine Dorries does it again - congratulates Nadhim Zahawi for wrong job
Ed Balls and Susanna Reid dance on GMB as protester sings 'Bye Bye Boris'
Gary Neville hits out at ‘bullsh*tter’ Rishi Sunak over resignation
Bayern Munich not convinced Barcelona will exist in two years, refuse instalments for Robert Lewandowski
Dad who ran off with Ukrainian refugee says couple are doing 'brilliantly' - but he can't see his kids
You may also like
Sport
Sir Bradley Wiggins says he was sexually groomed as a child by cycling coach
News
Transgender women no longer allowed to compete at British female cycling events
News
Motorist fined for careless driving for causing cyclist to fall off despite not even touching her
News
Trans cyclist Emily Bridges banned from championship after calls for female athletes to boycott
Sport
Cyclist sparks huge crash on wet first day of Strade Bianche race
Next Page