Virgil van Dijk was seemingly not very happy when he found out that his move to Liverpool was suddenly off the cards. 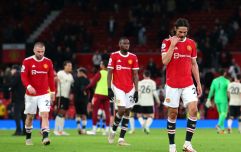 END_OF_DOCUMENT_TOKEN_TO_BE_REPLACED

Liverpool immediately abandoned the deal, apologised to Southampton and attempted to forget about the whole ordeal.

But it's pretty clear that the defender had his heart set on the move as he had something of a strop in the wake of the news that he wouldn't be heading to Anfield this summer.

Prior to breaking his silence via a cryptic tweet, van Dijk changed his Twitter biography to remove all mention of his current club.

The 25-year-old also changed his profile picture from one of him sporting the red and white of Southampton to one depicting him representing the Netherlands.

And while he was clearly annoyed at Southampton for grassing up Liverpool, somebody from the Saints must have since had a word because it wasn't long before van Dijk changed his bio back.

But he refused to return to the old profile picture.

So that's a win for him.

I know people say don't but I actually think a lot of that recent bio change from Van Dijk. Hope he's as fuming as us.

For what it's worth (very little), Van Dijk has put Southampton back into his bio after deleting them yesterday. He's not happy, either way. pic.twitter.com/8HuYOZl2HO