Not your usual legal dispute

Valencia C.F. have found themselves in a legal dispute with DC Comics over the use of the image of a bat on their club crest, which DC claim has too much of a resemblance to the Batman logo.

The bat can also be seen on the outside of Valencia's Mestalla stadium, as well as on the inside, painted on the seats of the ground's biggest stand. The bat has been an image synonymous with the region of Valencia, as well as Catalonia and the Balearic Islands since the 1200s.

The dispute has arisen between the two organisations before, first in 2014, then in October 2018, but to no avail. It resurfaced after the football club's 100th birthday this week, which was marked by a special edition of the crest that featured only black and gold, as opposed to its usual red and yellow stripes below the bat. 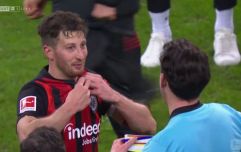 END_OF_DOCUMENT_TOKEN_TO_BE_REPLACED

Valencia have actually donned this crest on their jerseys all season, but the club's centenary celebrations provoked DC to reignite the legal battle.

Batman's first appearance was in 1939, 20 years after Valencia C.F's inception. So you'd assume that DC don't have a leg to stand on. But that has not stopped them submitting a complaint to the European Union Intellectual Property Office (EUIPO).

A Valencia spokesperson has dismissed DC's claims, saying: “We are not going to stop using the bat because DC Comics says it, there is no commercial brand that has a worldwide exclusive on bats," adding: "When this club played with a bat in the chest, in the United States they were chasing bison."

Trademark complaints have been made against the club but no lawsuit has been filed.