Usain Bolt set to have trial with Borussia Dortmund

Is Usain Bolt on the cusp of a professional football career?

Almost certainly not, no. 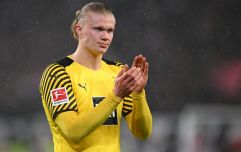 END_OF_DOCUMENT_TOKEN_TO_BE_REPLACED

He has, however, just been handed the opportunity to show what he can do with a ball at his feet by Borussia Dortmund, who have handed the recently-retired Jamaican sprinter a trial.

Bolt, who has spoken of his dream of playing for boyhood club Manchester United in the past, was supposed to represent the English club's legends side in a friendly against their Barcelona counterparts in September. However, a torn hamstring in his final race at the World Championships in London ruled the 31-year-old out of the game.

Dortmund had offered Bolt a trial in the past and now their CEO Hans-Joachim Watzke has stressed that the Bundesliga club intend to honour this. 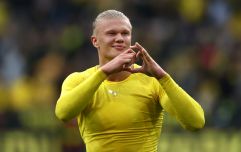 END_OF_DOCUMENT_TOKEN_TO_BE_REPLACED

"Our word is our bond," he told Revier Sport.  ""I will meet Puma CEO Bjorn Gulden this week, and that's on our list."

Puma were one of Bolt's main sponsors throughout his athletics career and just so happen to be Dortmund's kit suppliers. While many will assume this is therefore nothing more than a publicity stunt for the sportswear manufacturer, Bolt has spoken seriously about launching himself as a footballer following his sprinting career.

Speaking to FIFA.com recently, he explained:

"Yes, I would love to play football now. A lot of clubs have reached out.

"Unfortunately, I got a bad hamstring injury in August and haven't been able to do any training since then. Hopefully I will be able to play some games in 2018."