At the turn of the year, Jimmy Smith revealed that the UFC declined the opportunity to re-sign him for another year despite his popularity among mixed martial arts fans.

END_OF_DOCUMENT_TOKEN_TO_BE_REPLACED

The move came as a surprise to many because the former Bellator commentator had transitioned so seamlessly to life in the UFC.

Smith revealed how he came to learn that his services were no longer required, claiming that the organisation was going in a new direction for their deal with ESPN.

"Very simply it was, ‘you’re great, fantastic, we love everything you did but we’re going with UFC fighters for 2019'. So, that’s it," Smith said on the MMA Hour.

"I don’t think I’m leaving out any syllables. That was literally the conversation. It was, ‘loved everything you did but with fewer shows, we’re going with UFC fighters for those shows. Other than Joe [Rogan] it’s all UFC fighters, that’s it. We had no issue with your performance, everybody loved you, but you didn’t fight in the UFC', so that’s it."

Smith, who has a professional record of 5-1 in MMA, has a theory about why the UFC is insisting on having their own fighters commentate on bouts moving forward.

"What does it also do for them contractually?" Smith continued. "Hey, when you're done then you'll get airtime. 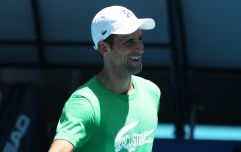 END_OF_DOCUMENT_TOKEN_TO_BE_REPLACED

"These guys don't have a parachute. They don't have anything at the end so it's another incentive, that they might be on the commentary team.

"Even beyond what the fans think and how they do the job and all these things, from their point of view everything is in house. You're using people who might be at the end of their career and might need a little incentive.

END_OF_DOCUMENT_TOKEN_TO_BE_REPLACED

"They're saying, 'You might get on the Fox desk a little bit. You might have something when it's all over.'

"Do the fans care? Maybe, maybe not.

"They have to learn how to do the job on the job, which is hard. But it also gives the UFC another incentive for their fighters and that's important. From their point of view, it's kind of another carrot and stick for fighters."