McGregor is back in training and set for a sit-down meeting with UFC President Dana White to discuss his return to the Octagon.

The last time we saw McGregor was in his submission defeat to fierce rival Khabib Nurmagomedov last October and after that fight, the Dubliner's long-time coach, John Kavanagh, suggested that he might not corner 'The Notorious' again.

The Straight Blast Gym Ireland owner previously claimed that he'd need to be convinced to return to the Octagon with McGregor but now Kavanagh admits that he plans to be there when the former UFC featherweight and lightweight champion fights next.

"I don't think [me cornering Conor is in doubt]. I'm sure I'll be there, we talk almost daily," Kavanagh said at a media day ahead of Bellator London.

The #BellatorLondon media day is in full effect! Our Irish fighters are entertaining the media in @sbgireland 👊 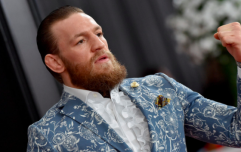 END_OF_DOCUMENT_TOKEN_TO_BE_REPLACED

"He doesn't have a fight lined up yet obviously but as soon as he does we'll get the old gang back together and start plotting, training and I'm sure he'll steal the show again. There's no doubt he'll do that."

McGregor was apparently in talks to fight Donald Cerrone this summer but that bout fell apart due to a dispute about whether the Irishman would feature in a main or co-main event, prompting the latest retirement announcement which he quickly rowed back on.

The UFC's plan is to have McGregor compete at some stage in 2019 but his coach is unsure of the timeframe for McGregor's return.

"I have to be honest and say that I don't know," Kavanagh said when asked if McGregor will fight this year.

"That's a question for Conor, he's got a lot of other stuff going on so I'll just be honest and say I don't know."