Aston Villa defender Tyrone Mings believes players are still right to take the knee before games, amidst an ongoing debate as to the efficacy of the gesture. 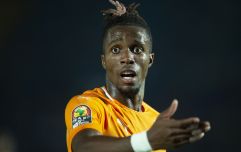 END_OF_DOCUMENT_TOKEN_TO_BE_REPLACED

In recent weeks, some high-profile stars have questioned how far taking the knee actually goes in combatting racism.

A victim of racism on social media, Zaha has previously spoken out about the abuse he receives, and the need for social media companies to enforce stronger action.

Zaha said in multiple interviews that he would no longer be adhering to the custom of taking the knee before kick-off in protest against discrimination, as the gesture had, in his view, lost its meaning and begun to feel hollow.

Wilfried Zaha became the first Premier League player to vow not to take the knee prior to kick off. (Photo by Mike Hewitt/Getty Images)
Advertisement

"I feel like taking a knee is degrading. Growing up, my parents just let me know that I should just be proud to be black, no matter what, and I just think we should stand tall," the Palace forward said while speaking at the FT Business of Football conference. 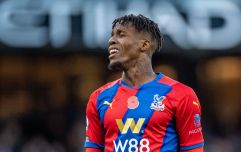 END_OF_DOCUMENT_TOKEN_TO_BE_REPLACED

Tyrone Mings still believes the gesture "sends out a powerful message", however.

"This is a demonstration of the injustices that different races within football have felt.

"We have t-shirt campaigns, but to say we've unified the sport in a pre-game anti-racism message is so powerful and is something we shouldn't let go. 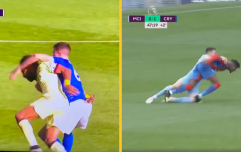 END_OF_DOCUMENT_TOKEN_TO_BE_REPLACED

Asked for his opinion on Zaha's stance, Mings said he respected the Crystal Palace man's decision, but ultimately thinks it needs to remain in the game.

“Obviously Zaha has come out as the first player to stop doing it and any person who has a passionate stance on what we’re doing at the moment should be respected.

“For Zaha to be the first person to come out and be so passionate about not doing it, that he is happy to stand out there on his own as a black man and not take the knee, they are the sort of conversations that we should be encouraging."

In the EFL, several sides have stopped taking the knee.

Brentford announced they will no longer be taking the knee before kick off after voting on it as a group.

In an interview with Sky Sports, Brentford striker Ivan Toney said players were being "used as puppets".

He said: "Everyone has had their say, and everyone agrees [that] we have been taking the knee for however long now and still nothing has changed.

"We are kind of being used as puppets, in my eyes; take the knee and the people at the top can rest for a while now, which is pretty silly and pretty pointless. Nothing is changing."