Tokyo Paralympics: Gold in the wheelchair rugby as Team GB continue to sweep up medals

Team GB are absolutely flying at the Tokyo 2020 Paralympics, with British athletes racking almost the same amount of medals won in Olympics already - there's still a full week of fun yet to go!

The latest addition to the tally came in the form of a historic gold in the wheelchair rugby, beating USA by 54 to 49 to bring home Britain's first gold in the event. Brilliant stuff.

They weren't the only medallist today, however, with more than a dozen medals won in the past 24 hours, including golds in the judo, mixed rowing, women's triathlon and many more.

The highlights are many, but the one-two finish in women's 100 metres was one of our particular favourites, as Hannah Cockroft took gold in style and was soon followed by Karé Adenegan in second. 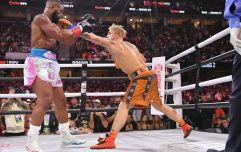 Tyron Woodley set to fight Dan Hardy in the UK

END_OF_DOCUMENT_TOKEN_TO_BE_REPLACED

As well as setting records in the 100m, Claire Cashmore also made her own little slice of history in the triathlon too by becoming the first-ever medallist to take a podium after having transferred over from another sport, having previous won medals in the swimming.

She’s the first ever medallist from another sport to podium in triathlon 👏 👏👏#ImpossibleToIgnore pic.twitter.com/6fx6FNC6Dg

These latest additions make it a total of 60 medals in the Tokyo 2020 Paralympics for Team GB, just five shy of the nation's Olympic total this year. You love to see it.

Team GB currently sit second in the overall tables - a good 20 medals ahead of Team USA but some 40 odd away leaders, China. The way things are going, who knows what the table will look like next week?

Keep going guys, you're doing us so proud!