Leicester are even thought to have accepted a bid for the player from Championship side Sheffield Wednesday, only for the club's owners to veto the move at the 11th hour. 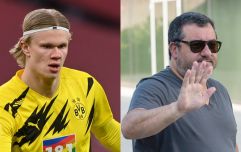 END_OF_DOCUMENT_TOKEN_TO_BE_REPLACED

Football Insider report that Vardy was keen to return to his hometown club, who had released him as a teenager in 2002.

Leicester's then-manager, Nigel Pearson, was believed to have sanctioned the deal, but the higher-ups had a last-minute change of heart.

If true, it's a good thing they did as Vardy's goals have propelled the Foxes to the top of the Premier League table with just 14 games remaining.

The 29-year-old's 18 strikes have him three clear of nearest challengers Harry Kane and Romelu Lukaku, while he broke Ruud van Nistelrooy's long-standing record for goals scored in consecutive games.

Talk has also grown of a film based on the story of Vardy's life - we doubt there'd have been the same clamour if he was currently banging them in for Wednesday in the second tier.