A bombshell revelation from the former Manchester United defender

Patrice Evra said that Arsenal legend Thierry Henry turns the TV off whenever he sees Granit Xhaka leading the Gunners out as captain. 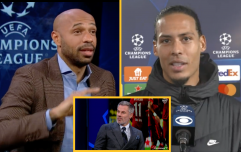 END_OF_DOCUMENT_TOKEN_TO_BE_REPLACED

Evra was speaking as a pundit on Sky Sports, in the wake of Arsenal's embarrassing home defeat to Burnley.

Arsenal spurned a number of chances to test Nick Pope in the Burnley goal, and were made to pay for their profligacy in front of goal.

The Clarets got the only goal of the game in the 73rd minute when Pierre-Emerick Aubameyang headed into his own net.

However, Arsenal had been handed an uphill task just before the hour mark when Granit Xhaka was given his marching orders. 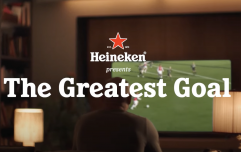 END_OF_DOCUMENT_TOKEN_TO_BE_REPLACED

The Swiss midfielder had initially been booked for an off-the-ball incident with Burnley midfielder Ashley Westwood. But the yellow card was soon upgraded to a red upon closer inspection through VAR.

Xhaka could be seen grabbing Westwood by the throat, and was subsequently dismissed for violent conduct.

Extraordinary claim by Patrice Evra on Sky Sports just now claiming he went round Thierry Henry’s house one day when #AFC were about to play but Henry turned his TV off when he saw Xhaka was Arsenal captain for the game. 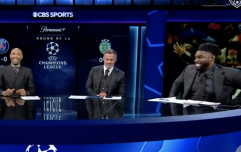 END_OF_DOCUMENT_TOKEN_TO_BE_REPLACED

After the game, Patrice Evra said that it's not the first time Granit Xhaka has let the club down. Even club legends have lost patience with their former pro, if Evra's fascinating anecdote is anything to go by.

Recalling a story involving his compatriot Thierry Henry, Evra said: "I will tell you a quick story. Thierry Henry one day invited me to his house and he said, 'Come, Patrice, we will watch the Arsenal game.'

"He turned on the TV and the first image he saw on the screen was Xhaka leading the Arsenal team, being the captain. Thierry Henry turned off the TV, I said 'What's happened?'

"He said, 'I can't watch my team with Xhaka being the captain. We didn't watch the game. We started talking about many other things and he turned off the screen.

"That tells you everything about what even legends of this club think about him."

popular
La Liga chief brands PSG 'an insult to football' after Kylian Mbappe snubs Real Madrid
Groom slammed for going to own wedding to bride, 16, in jeans and t-shirt
Woman reveals cruel reason date dumped her after they had sex for the first time
Confusion as woman appears to fart during viral clip of Depp-Heard trial
Kylian Mbappe asked PSG to sell Neymar and replace him with Ousmane Dembele
Topless mum in her undies rescues pet goose from bald eagle in crazy video
The JOE Friday Pub Quiz: Week 295
You may also like
Sport
Thierry Henry suggests people are 'mixing Covid and the festive period'
Sport
Thierry Henry reveals 'hero' message he sent Bukayo Saka after Euro 2020 final
Sport
Thierry Henry says Arsenal get 'smashed' whenever they play a 'big team'
Sport
Jamie Carragher's attempt at an American accent will give you nightmares
Sport
Thierry Henry says Robert Pires 'lost his composure' for famous botched penalty
Next Page