Michael O'Neill's Northern Ireland are poised for the knock-out stages of Euro 2016. Their 2-0 win over Ukraine made up for the disappointment of losing their opener to Poland.

Up next are Germany, on Tuesday. For now, their thousands of travelling fans are soaking up the atmosphere, views and beverages on offer in France.

END_OF_DOCUMENT_TOKEN_TO_BE_REPLACED

These three Northern Irish fans were spotted on the streets today and, unfortunately for them, their jersey selection was outstanding. Nice, subconscious show of support for Ireland ahead of their game with Belgium.

This image was tweeted out by BBC Northern Ireland's Mark Simpson. 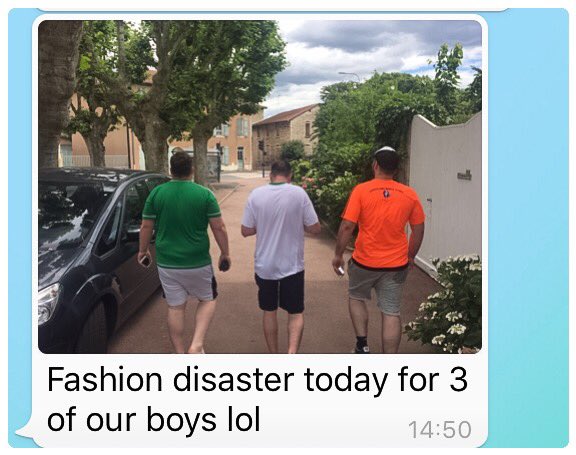 popular
Topless mum in her undies rescues pet goose from bald eagle in crazy video
Why Aston Villa could pocket £12m for helping Liverpool win Premier League title
Kylian Mbappe asked PSG to sell Neymar and replace him with Ousmane Dembele
Woman reveals cruel reason date dumped her after they had sex for the first time
The JOE Friday Pub Quiz: Week 295
La Liga chief brands PSG 'an insult to football' after Kylian Mbappe snubs Real Madrid
The German Cup final will be streamed for free on YouTube today
You may also like
Sport
Iceland include Euro 2016 viral traffic cone in official World Cup team photo
Sport
FIFA 18's World Cup mode features the Iceland 'Viking' clap celebration
Sport
How Robbie Brady's goal against Italy at Euro 2016 inadvertently led to the death of a dog
Sport
Shane Long's wonderful gesture to young fan after Euro 2016 defeat has only just been revealed
Sport
Only a true nerd will get full marks in our 2016 football quiz
Next Page