Marco Silva has had to convince Everton to part ways with a lot of money to secure a reunion with Richarlison.

Richarlison is reportedly set to move to Goodison Park for a staggering £50 million this summer, resulting in several raised eyebrows over the mammoth fee for a relatively unproven prospect. 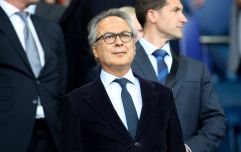 END_OF_DOCUMENT_TOKEN_TO_BE_REPLACED

Richarlison scored five goals in 41 appearances in his debut season for Watford and Silva is so keen on working with the Brazilian again that he's persuaded the Toffees to do everything in their power to get the deal done.

£50 million is a hell of a lot of money but there's an interesting theory doing the rounds in relation to why the fee for the 21-year-old is so high.

Everton and Watford have been locked in a compensation battle for months after the Merseyside club eventually managed to make Silva their new manager following a rejected approach for the Portuguese coach last November.

Watford believe that the Toffees' much-publicised pursuit of Silva resulted in a significant downturn in form for Watford and Silva was eventually sacked in January.

While the clubs continued to haggle over the compensation package throughout the summer, a deal was agreed for Richarlison which some believe is excessive.

However journalist Rob Vera has an interesting theory which suggests that Everton decided to offer the Hertfordshire club such a high fee for Richarlison in the hope that it might smooth over the compensation dispute over Silva.

While we wait for clarification on the Richarlison fee, don't be surprised if the Watford complaint for compensation over Silva disappears. Everton get their player and avoid protracted arbitration. Watford get an aesthetically-pleasing fee when it's really a fee for both. #EFC

popular
'Super recogniser' draws 'accurate' modern Maddie McCann to help police find her
Mum in jail for murder pays tribute to son, 6, killed by his dad and new girlfriend
The JOE Friday Pub Quiz: Week 272
Chilling video shows moment step mum tried to get away with murdering boy, 6
Bellingham and Haaland criticise refereeing performance after Bayern Munich defeat
'I did three grams of coke during a game': Inside football's problem with Class A drugs
David de Gea’s time at Man Utd is 'probably going to end quite shortly', claims Sinclair
You may also like
Sport
Everton Director of Football Marcel Brands involved in heated exchange with fan
Sport
Jurgen Klopp riled by line of questioning in pre-match Everton interview
Sport
You have four minutes to do this tricky Everton and Liverpool quiz
Sport
Ian Rush believes pressure will 'crank up' on Rafa Benitez if Everton lose to Liverpool
Sport
Review into Everton's injury record see head of medical services leave the club
Next Page