When you think of the world's great football rivalries, what springs to mind?

END_OF_DOCUMENT_TOKEN_TO_BE_REPLACED

But make no mistake about it, although it may be one of football's (soccer's) newest derbies, fans of the two clubs don't seem to get on that well. Last year it kicked *right* off between the two sets of supporters.

Just listen to the sheer hatred in the 'Who are ya?' chants heard in the video below.... 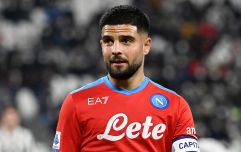 END_OF_DOCUMENT_TOKEN_TO_BE_REPLACED

With the two sides set to meet again in the coming days as part of Major League Soccer's 'Rivalry Week', New York City FC have taken an unusual step in a bid to get an edge over their new, more established rivals.

Yes that's right. They're asking rival fans to hand in their Red Bulls' shirt (and with that their allegiance to their club) in favour of a brand new New York City FC one.

Only in America, eh?

Red Bulls fans weren't going to take this lying down though...