Nigel Pearson is on his way out of Derby County, and he hasn't even called a reporter an "ostrich" yet.

The former Leicester City manager was suspended earlier this week by the Championship club, just hours before a game against Cardiff City, following reports he had a row with the club's owner. 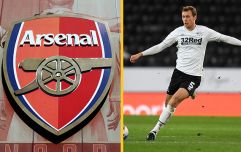 END_OF_DOCUMENT_TOKEN_TO_BE_REPLACED

Pearson had also reportedly fell-out with some players thanks to his abrasive style. Derby hadn't won in their last six games under Pearson, but won their first match without him 2-0, and followed that up with a 1-1 draw away to Reading on Saturday.

Anyone familiar with Pearson's escapades in his final few months at Leicester won't be too surprised to see his time at Derby to end in tears, but few could've predicted the manner of his exit from the club.

According to The Sunday Mirror, Pearson felt his privacy was being intruded upon after the owner deployed a drone to watch training sessions.

Derby's owner Mel Morris reportedly used the device to "spy" on Pearson and the team, and to watch training from anywhere in the world.

Pearson took issue with it and is believed to have confronted Morris over the drones, which signalled the end of his time at Derby.

Neither Pearson or Derby have responded to reports of drones spying on training sessions, and the 53-year-old has yet to be officially sacked.