The exceptional documentary on George Best is on TV tonight

"The promise of magic is what George Best always brought"

Before Ronaldo, Messi and any other football superstar, there was George Best. 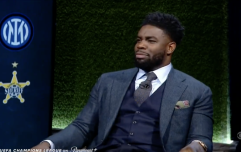 END_OF_DOCUMENT_TOKEN_TO_BE_REPLACED

In the eyes of many football fans, he was the best. On the field, 'El Beatle' was capable of producing moments that were absolutely mesmeric and as Pele said “George Best was the greatest player in the world." Quite simply put, he made the beautiful game look beautiful.

Away from the pitch, Best perfectly described his life with one iconic quote "I spent a lot of money on booze, birds and fast cars – the rest I just squandered."

Previous documentaries and film adaptations have failed to do justice to Belfast's most famous son, but we have a feeling that George Best: All By Himself, most certainly did.

In their review, The Express stated that : Gordon's emotional documentary pays tribute to the incredible gifts of Best in his prime but it doesn't flinch from the long downward spiral of his decline," while The Independent called it an "illuminating and moving film which shows Best at his seediest and most pathetic but never loses sight of the brilliance that made the homesick kid from Belfast into football's first superstar."

For those that want a sneak peek, here's a look at what's in store on BBC Two at 9pm.

Plot's it all about:  He was football’s first rock and roll star – a handsome, charismatic Belfast boy who could thrill and excite the crowds with every turn of the ball. But George Best was also the lead in his own Shakespearean tragedy, a flawed genius, brought down by drink, temptation and depression.