Teddy Sheringham is coming out of retirement...aged 49

Once a legend, always a legend.

It doesn't matter how old you are, surely the old magic never leaves you? 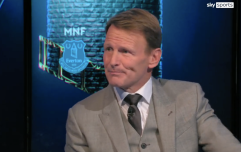 END_OF_DOCUMENT_TOKEN_TO_BE_REPLACED

We're about to find out as 49-year-old Manchester United, Spurs and England hero Teddy Sheringham has announced he is coming out of retirement.

Sheringham is ready to lace up his boots once more, this time for Stevenage Borough where he is currently manager.

He announced he was dusting the boots off and registering to play just in time for Stevenage’s upcoming Herts Senior Challenge Cup match against Welwyn Garden City on Wednesday.

Despite being on the verge of turning 50, we know all too well that the man can still find the net as well as he ever could.

popular
Brit on holiday beaten with a brick by gang before being thrown in the sea unconscious
Fears surging covid cases could ruin summer holidays with return of tests and rules
The longest walkable distance on Earth which no one is known to have completed
Dad who ran off with Ukrainian refugee says couple are doing 'brilliantly' - but he can't see his kids
Men with ‘very large penises’ wanted for new documentary
Teens are turning up to watch Minions in suits - and why cinemas have been forced to ban them
British schoolboy breaks internet after attending prom in sequined tuxedo ballgown
You may also like
Sport
Former Liverpool manager says failure to sign Teddy Sheringham was his "biggest transfer regret"
Sport
Everyone is ripping the p*ss out of Teddy Sheringham's outfit at the West Ham game
Sport
Dele Alli is the new Paul Gascoigne, meaning he joins an illustrious club of new Gazzas
Sport
Stevenage players should know better than to even try to bullsh*t Teddy Sheringham
Sport
Is Teddy Sheringham coaching his goalkeepers to score from 95 yards? (Video)
Next Page