As someone who spends most of her sporting career hidden behind pads and a helmet, Maddie Hinch is still surprised by how many people recognise her in the street.

"They must be proper fans," says the Team GB hockey goalkeeper, who made history by saving all four Dutch penalties in the shootout victory which ensured Great Britain left Rio de Janeiro as gold medalists.

"Before, not many people could even tell you the name of one hockey player and now they know who we are - that’s what it’s all about. It’s massive for us and we’re hoping it’s the start of something great."

Hinch, who is now playing her club hockey in the Netherlands with SCHC, began her journey to glory earlier than most, telling me that her omission from the squad from the 2012 London games spurred her on to make the number one jersey her own this time around.

Beth Storry was the number one for that tournament, as Team GB took bronze, but 'Mad Dog' - then 23 years of age - was denied the chance to serve as understudy at her home games to a woman she describes as a mentor.

"I really wanted to follow in her footsteps, but maybe it was the right decision to leave me out and it certainly made me more determined," she says.

And, while someone always has to miss out at a major tournament, there is a togetherness within the GB squad which helped them overcome a pre-tournament hiccup. 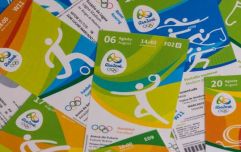 END_OF_DOCUMENT_TOKEN_TO_BE_REPLACED

In the 2016 Champions Trophy, played in London in June, Great Britain finished fifth of six teams after losing all but one of their pool games.

And, while that may have taken some of the pressure off when it came to challenging for any medal in Rio, let alone gold, that was only from the outside.

"We knew we had great players and just needed to stick together and we were confident we could do well," Hinch recalls.

"The way the tournament went, it was about taking one game at a time.

"We had a difficult opener against Australia and thought if we could beat a team we’ve struggled against before then we’ve got a chance, and we did just that.

"After that we gained momentum as we went and that gave us a real confidence boost."

Just as momentum grew within the camp, interest increased back home. 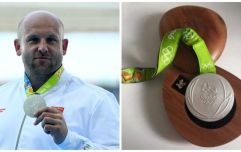 END_OF_DOCUMENT_TOKEN_TO_BE_REPLACED

The British medal tally was growing in a variety of disciplines, with the Alistair and Jonny Brownlee completing a triathlon one-two the day before the hockey final and Jade Jones winning taekwondo gold within hours of the brothers' success.

But Hinch and her teammates were unaware of how everything was being received in the UK, thanks to a self-enforced social media blackout.

"We knew the Olympics was going to be a great platform to raise awareness of sport and being more active on social media could have [achieved] that, but that could also be a potential distraction," she explains.

"We agreed to completely avoid looking at social media, some people even changed their phone numbers while we were out there.

"We had absolutely no idea of the build-up and the potential viewing figures, and we might have been more nervous if we knew how many millions were watching at home."

In the end, an estimated nine million people watched the final on the BBC, with plenty glued to their screens as Hinch became the hero.

She kept out efforts from Willemijn Bos, Ellen Hoog, Laurien Leurink and Margot van Geffen, with goals from Sophie Bray and Hollie Webb ensuring a 2-0 victory for Team GB after a thrilling 3-3 draw sent the game to a shoot-out.

The format of the penalties captured the attention of many, with players getting a one-on-one run-up rather than a single shot, making for a far more exciting spectacle than its football equivalent and a far greater test of mental fortitude.

It is a relatively new addition to tournament play - coming into the game as recently as 2011. The Team GB number one prefers the mental gymnastics of the 'penalty shuffle' to the previous system, and not just because she has developed a real knack for it.

"When that format came out I knew I could make a name for myself as a keeper," Hinch recalls.

"You need to be able to run around and play as a goalkeeper, and it suits my personality. But I’m learning and the outfielders are too and they’ll be able to bring new [techniques].

"It’s a better test of the skill of players, of outfield players and keepers, and I think it’s a fairer contest.

"Compared to penalties in football it’s more exciting, a more dramatic finish to a game and what captures people the most."

In most years, the hockey gold medalists' display would be the precursor to award after award, but 2016 is different.

At a team level they have to compete for honours with Leicester City's unlikely champions, among others, while the list of individual achievements from British stars has meant the likes of Tour de France winner Chris Froome and world heavyweight boxing champion Anthony Joshua haven't even made it onto a 16-strong Sports Personality of the Year shortlist.

But Hinch made the final few for BT Sport's Action Woman of the Year award, while teammate Kate Richardson-Walsh has a SPOTY nomination and the victorious squad from Rio are in the running for Team of the Year in Sunday's ceremony.

"We’ve all said if you’re even up for an award in 2016 you’ve done well already, as it’s the greatest year in sport in ages," she admits.

"As a team we have won everything we have been up for but the big one is on Sunday - that would really top off a great year."

And besides, she already secured one personal victory a few months back when she saw the messages she had received during the final - even if she was initially overwhelmed by it all.

"I remember turning on my phone after the final and it had gone nuts - it was remarkable, the number of messages and tweets, and I had to turn it straight off again," she laughs.

"But eventually I went back to see people talking about us, it was very cool to see.

"The stand-out one was probably JK Rowling - she sent six tweets in a row about the game. Gary Lineker too. Where do you start?"

Yes! Maddie Hinch you are a superstar! Another gold for @TeamGB

Since returning from Rio, Hinch has paid a number of visits to schools and says she is blown away by the number of children actually asking to play in goal.

It is a position that teachers usually find hard to fill - Hinch herself was only drafted in after a coach thought her rounders skills were transferrable to a new sport - so it fills her with pride to see the impact her performance in Rio has had.

Hockey remains relatively well-funded, as far as Olympic sports are concerned, and that allows her and her teammates to devote all their time to the sport, be it training, playing or sharing their expertise with the next generation. But there is always more that can be done.

"We’re lucky that we’re one of the few sports that gets enough funding for the players to be full-time. I’ve been full-time for six years or so, and that allows me to focus solely on hockey," she explains.

"I’m hoping there will be a lot more interest after Rio and a lot more sponsorship opportunities - we’re well aware that sporting careers are not long-term things and we have lives to live; the more support we can have, the less time we’ll spend worrying about earning extra money."

Hinch is already a Red Bull official athlete while other members of the Team GB squad have endorsement deals of their own, but the summer's achievements can act as a springboard to keep moving forward.

If they can add the 'big one' this weekend, who knows what else might lie in store.

To find out more about Maddie’s upcoming projects, go to RedBull.com

popular
Insulate Britain demand motorway speed limit reduction to 10 MPH
Jack Grealish donates £5k towards fundraiser for woman who died in Merseyside car accident
'Can I get my coat?' Chilling arrest footage of woman on trial for stabbing husband
Everton footballer has bail suspended until January
Woman starts driving over Insulate Britain protestor in furious standoff
18 months on, Liverpool vs Atletico Madrid from the fans who were at Anfield that night
NHS doctor facing deportation because 'she can't speak English'
You may also like
News
Two guys blagged their way onto the Olympic parade, but Sky News caught them out
Sport
Tinder announces Olympians with the most right swipes at Rio 2016
Sport
Watch a very angry Neymar confront a fan after winning Olympic gold for Brazil
Sport
This is how much each country’s Olympians earn for winning gold - and how much it can cost them
Sport
Japanese PM Shinzo Abe wins Olympics closing ceremony with brilliant Super Mario appearance
Next Page