Great Britain has made a winning start to the Tokyo Olympics after the women's football team ran out comfortable winners in their tournament opener against Chile on Wednesday.

END_OF_DOCUMENT_TOKEN_TO_BE_REPLACED

A goal in each half from Ellen White clinched a 2-0 victory for Hege Riise's side, who dominated possession throughout in the energy-sapping Sapporo heat.

As was announced before their arrival in Japan, the players took the knee ahead of kick-off to highlight discrimination and racial injustice. The gesture was reciprocated by their opponents.

The opening goal came inside 20 minutes as White, the joint top scorer at the last World Cup, applied the finishing touch to a move involving two of her Manchester City teammates. Lucy Bronze had stood up a cross to the back post which was nodded into White's path by Lauren Hemp.

Team GB's first goal at the Olympics in nine years!

Ellen White has waited a long time for this...

END_OF_DOCUMENT_TOKEN_TO_BE_REPLACED

Bronze was involved in White's second, though more directly. Having sidestepped a Chilean defender and nudged the ball into the area, she floated the ball across the box to where White had peeled away into a pocket of space. Her acrobatic finish effectively ended the contest.

The iconic celebration makes an appearance at the Olympics! 🤓 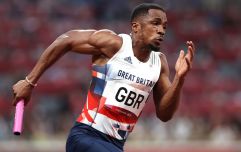 END_OF_DOCUMENT_TOKEN_TO_BE_REPLACED

Sterner challenges lie ahead, but Great Britain's dominance went some way to allaying concerns about the lack of playing time the team have had in the run-in to the tournament. Along with looking comfortable in possession, they created plenty of chances throughout the game and could have easily opened up a larger margin of victory.

The result and performance were, though, a pleasing way to end a nine-year wait for a British appearance in Olympic football. Ahead of Canada's opening fixture with Japan later in the day, they move to the top of Group E as a result.

They return to action on Saturday against Japan, by which stage the opening ceremony for the Tokyo Olympics will have taken place.