As a tense World Cup group game with Serbia appeared destined for a 1-1 draw, Xherdan Shaqiri beat a pathetic attempt to play him offside (he was in his own half, ffs) to slide hime a 90th-minute Switzerland winner. 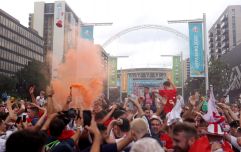 END_OF_DOCUMENT_TOKEN_TO_BE_REPLACED

The goal came as a massive boost to Vladimir Petković's side's hopes of reaching the last 16 stage, taking them second in their group behind Brazil on goal difference.

While most of the talk since the game has centred on the controversy of the celebrations used by Shaqiri and Switzerland's other scorer, Granit Xhaka, some of those watching the game appeared to enjoy the significantly less political way one Swiss supporter reacted to the deciding goal.

Footage showing the Swiss players celebrating in front of their supporters also appears to show a **wheel of cheese** being thrown in their direction. Falling just short of the advertising hoardings - nearly decapitating a cameraman in the process - the cheese then bounces onto the grass...

A fan threw a wheel of Swiss cheese onto the field after the late Shaqiri goal 🤣#SRBSUI pic.twitter.com/O44eQ8z2f8

Did I just see a full wheel of fucking cheese flying down from the celebrating Switzerland fans?! Hahahahaha what a World Cup!!! 🧀🧀🧀🧀 #Switzerland #SERSUI #Worldcup2018Russia #WorldCup pic.twitter.com/UfuS3XyuEM

Someone just threw a wheel of fucking cheese from the crowd when Switzerland scored. #wolrdcup2018

Did the Switzerland fans just throw a wheel of cheese?! 🤔😂 #SUI #WorldCup

How did they get this through security? Is this a traditional way of celebrating Swiss goals? If so, has anyone ever been killed by a wheel of cheese hitting them on the head? So, so many questions.

We just hope Switzerland mark their next World Cup goal by throwing something equally Swiss in the direction of their players. A Toblerone, perhaps? Maybe a cuckoo clock? Hell, why not just throw Roger Federer or a live brown Swiss cow?

popular
New Highway Code rule will fine drivers £1,000 for opening door with wrong hand
Motorcyclist dies in crash live on TV while trying to escape police
Bookmaker received $420,000 worth of bets on controversial Arsenal yellow card
Woman who saved enough to retire by 26 reveals three golden rules she stuck to
Fitness expert reveals army technique to fall asleep in two minutes
Police hunting man who rings doorbell at the same time every week
Dermot O’Leary stunned by definition of ‘grassilingus’ sex term
You may also like
Sport
FIFA to test automatic offside technology next week in preparation for Qatar World Cup
Sport
Biennial World Cup could cost domestic leagues and UEFA €8billion, says report
Sport
Life in Qatar as a migrant worker: What it costs to build a World Cup
Sport
Denmark to replace kit sponsors with 'critical messages' for Qatar World Cup
Sport
Otamendi violently elbows Raphinha before hurling him up from the ground
Next Page