Less than 48 hours after it was announced, Super League clubs are meeting to discuss cancelling it

The news comes after fierce backlash from fans, politicians, football managers, and players themselves.

All 12 'founder' clubs of European Super League have been on a call looking at the 'exit strategy' from their plans. Source says - with some understatement - 'They have heard the fans' 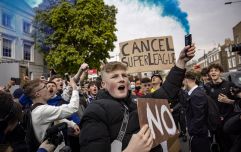 END_OF_DOCUMENT_TOKEN_TO_BE_REPLACED

This comes after it has been confirmed Ed Woodward has resigned in his position at Man United.

It was announced late on Sunday night that 12 of Europe's 'leading clubs' including AC Milan, Spurs and Arsenal would form a Super League, but the backlash from fans all over the world has seen the proposal fall apart on Tuesday night.

Chelsea were the first to withdraw from the competition, with Barcelona, Manchester City and Atletico Madrid soon following suit.

Manchester United faced heavy criticism for their part in the plans to form a closed shop of elite clubs, and as a result Ed Woodward has stepped down from his position at the top of Man United's board.