Anthony Joshua is not usually one to engage in trash talk.

But 'AJ' simply couldn't resist the opportunity to take a shot at the UFC heavyweight champion when Stipe Miocic officially called him out for a fight on the undercard of the upcoming Conor McGregor vs. Floyd Mayweather spectacle.

Eager for the payday that would accompany a fight against Joshua and confident of his ability to hang with the reigning IBF, IBO and WBA heavyweight champion, Miocic took to social media to make his availability known.

Hey @anthonyfjoshua let's have a proper tussle and still have time for tea and crumpets before the main event! #MayweatherMcGregor

Joshua was made aware of the offer via a post on the Instagram page, HeavyweightBoxingUK and took the opportunity to respond with a lighthearted dig.

'AJ' commented under the post with a catchphrase made famous by McGregor as he asked: "Who the fooook is that guy?"

Well Miocic has not taken too kindly to that little jibe as he hit back at the London 2012 gold medallist late on Monday evening. 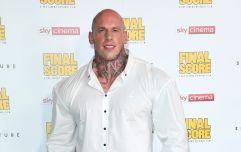 END_OF_DOCUMENT_TOKEN_TO_BE_REPLACED

Miocic is presumably suggesting that the sidelined Tyson Fury is in fact the best heavyweight boxer in the United Kingdom, not Joshua.

Fury unsurprisingly agrees with the UFC star, as the controversial boxer continues to ridicule 'AJ' ahead of their inevitable all-British showdown, which will likely take place at some stage in 2018.

popular
Tourist dies after losing arm and leg in shark attack at popular resort
Adele fans have 'mad respect' for her after she stopped her Hyde Park gig to help someone in distress
Jordan Peterson suspended from Twitter over Elliot Page comment - says he won't apologise
The JOE Friday Pub Quiz: Week 301
Threesome sees 60-person brawl break out on cruise ship, says passenger
Liam Gallagher is getting rinsed for endorsing Clarks but the collaboration makes perfect sense
Wimbledon accused of sacking temporary staff for 'bizarre' reasons
You may also like
Sport
Jake Paul responds after Tommy Fury confirms he was denied entry to US
Sport
Tommy Fury denied entry to US ahead of Jake Paul press conference
Sport
Jake Paul hits back at Tyson Fury's X-rated 'p****' chant with 'Beethoven' jibe
Sport
Anthony Joshua says he will be a "boxing legend" if he wins Usyk rematch
Sport
Tyson Fury's father reveals that he and his son are banned from travelling to America
Next Page