You simply don't lose the ability to strike a ball. 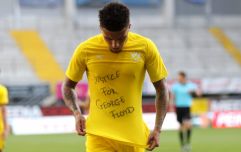 A history of footballers fighting for social justice

END_OF_DOCUMENT_TOKEN_TO_BE_REPLACED

The 41-year-old lined out alongside some fellow footballing legends and YouTube stars at the Wembley Cup final on Friday night.

The former Liverpool, Leeds and Manchester City striker may have lacked the fitness that he once had but while standing over a 30-yard free kick, Fowler proved that he was not going to rely on tap-ins to get his name on the scoresheet for his team, the Weller Wanderers.

Fowler broke the deadlock in the promotional challenge match with this, a stunning strike that arced straight into the top corner.

In the current transfer climate, that free kick alone easily makes Fowler worth at least £70 million. What an absolute scorcher.