The alleged abuse came from adults as well as children

St Helens RFC are investigating allegations of racist abuse aimed at a seven-year-old boy at their recent Super League match against Catalan Dragons.

The victim of the alleged abuse wore a Dragons shirt to the match, Sky Sports are reporting.

St Helens won the match 27-8 on Thursday night at the Totally Wicked Stadium. 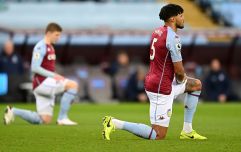 END_OF_DOCUMENT_TOKEN_TO_BE_REPLACED

The alleged victim's mother said her son, Oliver, was reportedly left in tears after comments from a number of St Helens fans, who wrongly assumed his was French.

The boy's mother posted a tweet about the abuse, saying the abuse came from adults as well as children.

"As his mum, to see him so upset breaks my heart," she wrote.

"He was just a little boy out to support a team. He did not deserve the abuse from a minority of narrow minded and ignorant 'fans'."

She went on to thank the stewards at the stadium who were "fantastic in giving Oliver reassurance" after she had brought the issue to their attention.