She said he was 'blacker than his suit'

END_OF_DOCUMENT_TOKEN_TO_BE_REPLACED

As Camavinga was being unveiled as a new Madrid player, the press conference was being shown by state broadcaster RTVE.

Footage showed Gonzalez remarking: 'Hostia, es más negro que el traje', which translates to: 'bloody hell, he is blacker than his suit,' about the French international.

RTVE said her comment "showed a lack of respect and are inappropriate for a public television channel," adding that the channel apologises "to the player and laments and firmly condemns the denigrating comments."

Gonzalez posted to social media to offer her "sincerest apologies to anyone who felt offended." 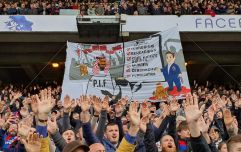 END_OF_DOCUMENT_TOKEN_TO_BE_REPLACED

"My comment, which was made without malice or disrespect toward the player, was however unfortunate," she wrote.

"It was a comparison that I could have made about any person of any colour. But I understand and feel that in this sensitive time we are going through, even though I also believe that things are becoming too radicalised and politicised, the media has an even bigger responsibility to help the fight against racism and any form of unjust inequality."

The network said it was investigating the incident “and would take the appropriate action."