With seconds remaining of the 3pm kick-offs, one individual was on to claim the £1m jackpot on Sky Sports' Super 6. Devastatingly, it wasn't to be thanks to late drama at the DW Stadium. 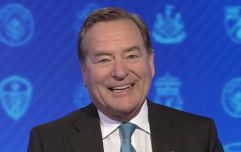 END_OF_DOCUMENT_TOKEN_TO_BE_REPLACED

In the 90th minute, Wigan Athletic - leading 2-1 at the time - conceded a penalty to Nottingham Forest.

Lewis Grabban stepped up to take it, and although the spot kick was turned away by the right hand of Christian Walton, it fell into the path of Hillal Soudani to turn home the equaliser.

Imagine being that person watching this all unfold. Imagine how much hatred you'd feel for Iain Dowie, for giving you that millisecond of hope after the penalty was initially saved.

Whoever you are, you're in our thoughts.