Shola Ameobi has found himself a new club

Shola Ameobi is one of those footballers you always want to see do well.

The local boy come good is much beloved by Newcastle United supporters, while he endeared himself to Bolton fans this season by offering to play for the club for free.

Unfortunately that move was blocked due to an embargo on the Trotters registering new players, but the veteran striker has stayed in Lancashire, joining Fleetwood Town on a free transfer. 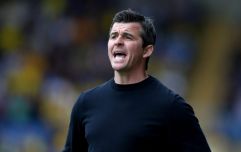 END_OF_DOCUMENT_TOKEN_TO_BE_REPLACED

He moved to Turkish team Gaziantep BB, before returning to England with Crystal Palace and then Bolton, where he scored twice in eight appearances.

But now he has the chance to follow in the footsteps of the greats, like Premier League top scorer Jamie Vardy and Puskas Award nominee David Ball. And people said he was finished.