But all it took was one shot back to the studio, where the legendary Irish goalkeeper was tucking into his dinner, to go viral after Liverpool continued their title challenge with a 2-0 victory over the Blues at Anfield.

While fellow pundits Ian Wright and Steve McManaman were brought to their feet in delight at the sight of Mohamed Salah's result-clinching wonder goal, Given hardly looked up from his grub.

The former Manchester City goalkeeper would understandably have preferred to see some points taken from Liverpool in the two-horse race for the Premier League title and he has given a hilarious explanation for his nonplussed reaction to one of the goals of the season.

"We were totally off air, so the producer has stitched me up at the end of the show," Given told Alan Brazil Sports Breakfast.


"He’s said to us, ‘we’ve just got a little clip to show you before we’re finished for the day’. 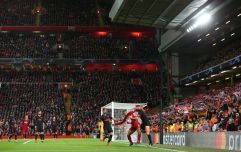 END_OF_DOCUMENT_TOKEN_TO_BE_REPLACED

"So I’m sitting there quite relaxed thinking, ‘what it’s going to be?’, and it’s me munching down a Sunday roast!

"I had my Man City head on. Ian Wright and Steve McManaman were going mad because it was as special goal, but I felt maybe Chelsea could have taken a point or two off Liverpool for my old club.

"Once Salah hit that strike I thought, ‘oh that’s it, they’re not losing now’, so it was back to my food!

'My nickname is ‘The Horse’ and the nosebag was back on as soon as the ball hit the net.

"I think I would have caught it, myself!"