Sam Allardyce allegedly caught mocking Roy Hodgson and Gary Neville, but that could be the least of his troubles

There could be a storm coming.

Sam Allardyce has only had one match in charge of the England team, but is already in a spot of bother. Not from under-performing players or pesky Icelanders, but due to an investigative report from The Daily Telegraph.

END_OF_DOCUMENT_TOKEN_TO_BE_REPLACED

The newspaper published a report on Monday night that alleges Allardyce "used his position as England manager to negotiate a £400,000 deal and offered advice to businessmen on how to 'get around' FA rules on player transfers".

Allardyce has yet to respond to the claims, but will undoubtedly have questions to answer after being filmed during the meetings with the fictitious businessmen. 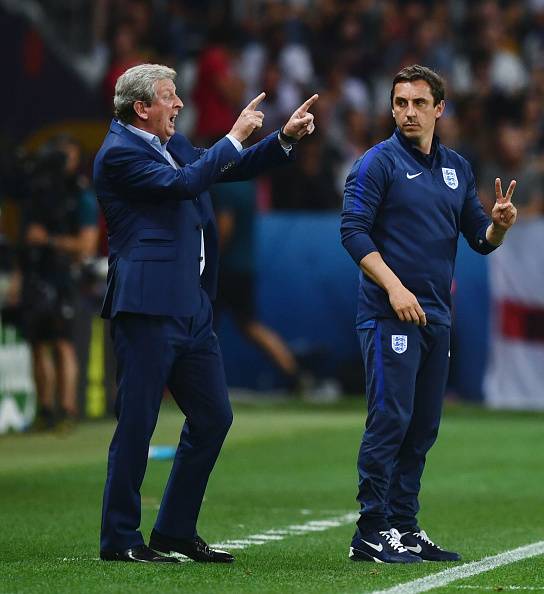 The report also has footage of the former Sunderland manager criticising his predecessor Roy Hodgson, referring to him as "Woy" - a derogatory nickname for the former England boss.

END_OF_DOCUMENT_TOKEN_TO_BE_REPLACED

Allardyce claims during the footage that Hodgson was "too indecisive", and the report claims Allardyce said his predecessor "hasn't got the personality" for public speaking.

Allardyce also took aim at Gary Neville, Hodgson's former assistant who resigned along with the rest of the England coaching staff after the team's embarrassing 2-1 defeat to Iceland in the last-16 of Euro 2016.

The report claims the former Bolton Wanderers manager said Neville was "the wrong influence for him", and Hodgson should've told him to "sit down and shut up".

Allardyce did not respond when contacted by the paper, while the FA requested to see the whole transcripts.

popular
Towie’s Yazmin Oukhellou and Jake McLean had ‘furious row in Turkish club’ minutes before horror crash, report claims
Conspiracy theorists believe the world will end today - here's why
Tesco will no longer stock popular pet foods including Whiskas, Pedigree and Dreamies
British schoolboy breaks internet after attending prom in sequined tuxedo ballgown
Teens are turning up to watch Minions in suits - and why cinemas have been forced to ban them
Dominic Raab may just have delivered the 'car crash interview of the year' over Chris Pincher scandal
Noel Gallagher branded 'vile' by disability charity after Glastonbury comments
You may also like
Sport
Eddie Nketiah and Tariq Lamptey close to switching international allegiance
Sport
Gareth Southgate says 'WAG' is a 'disrespectful' term
Sport
Fan 'racially abused and punched' by Germany supporter who made slur at Jude Bellingham
Sport
Owen Farrell, Manu Tuilagi and 10 uncapped players in latest England squad
Sport
'He's got an aura about him' - Big calls as Kyle Sinckler selects his 'Ultimate Pack'
Next Page