Southampton has accused the hotel of foul play

As we approach the end of the season is very little for anyone to play for in the Premier League. Swansea and Southampton are still fighting to survive, but Saints' victory this week in what was effectively a relegation play-off has put them in a much stronger position going into the final day. 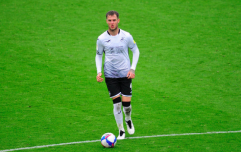 END_OF_DOCUMENT_TOKEN_TO_BE_REPLACED

Southampton captain Ryan Bertrand has revealed how a hotel related row before the game inspired the squad even more to go and win at the Liberty Stadium. The Saints squad were due to stay at the Marriott hotel in Swansea but were told the hotel had been hit with a virus, even though it remained open for the public to make bookings.

Southampton saw this as foul play by the hotel in a bid to derail their squad, but it backfired, as a late Manolo Gabbiadini winner clinched three points for the visitors.

Speaking on Sky Sports News, Bertrand explained that the farce "put more emphasis on the game, for us to go and get a result."

Bertrand couldn't resist taking another cheeky dig at Swansea, saying that Cardiff "was a lovely place."

WATCH: Ryan Bertrand discusses Southampton's huge win against Swansea as well as the impact of the team having their hotel rooms cancelled. 👀 https://t.co/5DuMQ5VfLZ

popular
Scotland international rugby star Siobhan Cattigan dies aged 26
Woman wins millions after suing mum's GP for allowing her to be born
A definitive ranking of every swear word from worst to best
Elon Musk shares 'evidence' we are actually living in a simulation
Nasa warns 'concerning' asteroid will break into Earth's orbit in a week
Lovely Bones author apologises to exonerated man who spent 16 years in prison for her rape
There's a petition to stop interviewing Will and Jada Smith so we can all be 'free'
You may also like
News
Leeds, Cardiff and Swansea put into lockdown
News
Swansea Christmas parade dubbed the 'worst ever', and only has three floats
Sport
Renato Sanches marks Bayern Munich return by scoring free-kick
Sport
WATCH: Michel Vorm channels his inner De Gea with incredible double save
Sport
Everyone is making the same bad joke after Spurs knock Swansea out of the FA Cup
Next Page