He has officially retired from rugby

Rugby stars all over the world have paid tribute to Sonny Bill Williams, after the All Blacks legend hung up his boots and officially announced his retirement.

END_OF_DOCUMENT_TOKEN_TO_BE_REPLACED

In his next venture, the gumshield will remain, but he is to swap his boots for boxing gloves.

"A massive thank you to the public & fans for all the support over the last 17 years.

"To my many teammates, thanks for the lessons and help along the way. It wasn't a perfect journey by any means but the lessons have helped shape me into the man I'm proud to be off the field today."

Tributes have been pouring in from some of rugby's biggest names. 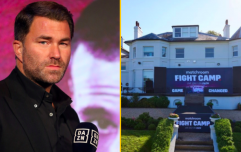 END_OF_DOCUMENT_TOKEN_TO_BE_REPLACED

"You know we all at one point in the backyard or on the footy field yelling 'SBW' while offloading...

"What you have done for the game and more importantly have been a role model and inspiration to countless young men around the world.

"The impact you've had on me personally is something I will forever be grateful for. Your record on the field speaks for itself but the man I know far exceeds any accolade or trophy. Love you bro."

Roger Tuivasa-Sheck, who is set to switch codes from rugby league to union, added: "Awesome career uso. All the best."

Ireland star Bundee Aki said: "Pleasure to play alongside you and against you my uso. Enjoy the next journey my uso."

Williams is expected to resume a career in boxing. Back in February, it was announced that he will face an unnamed opponent in April, before going up against former Aussie rules star Barry Hall later this year.

Williams is no novice when it comes to boxing. He has had seven professional fights, all of his bouts in the heavyweight division.

Throughout his career, Williams crossed codes between league and union on numerous occasions. He actually began his career in rugby league with the Canterbury Bulldogs, before moving to French rugby union giants Toulon in 2008.

Aside from a spell back in league in 2013 with the Sydney Roosters, he continued in union for teams such as Canterbury, the Crusaders, Chiefs and Blues in New Zealand and Panasonic Wild Knights in Japan.

He won the 2011 and 2015 Rugby World Cup with the All Blacks, one of only 21 players to lift the Webb-Ellis trophy on more than one occasion.

He returned to rugby league last year, running out for Toronto Wolfpack before returning to the Sydney Roosters.