Rugby player sent off for picking the referee up in celebration

Can you feel the love tonight?

The Pro D2 bore witness to some strange scenes on Friday evening, when a player was sent off for picking the referee up in celebration.

In France's second tier of professional rugby, hosts Beziers were up against visitors Nevers when the incident occurred.

The away side were leading 30-25 in the dying moments of the game when it all became a little too much for Nevers player Josaia Raisuqe.

The former Stade Francais man was elated to see his side pick up the victory. He probably enjoyed it too much.

So pleased was Raisuqe with the win that he celebrated by picking the referee up. We're not just talking about an overzealous hug. He quite literally lifted him in the air, above his head, in scenes reminiscent of the Lion King.

It's the circle of life. 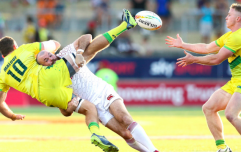 END_OF_DOCUMENT_TOKEN_TO_BE_REPLACED

Just as the circle of life brings with it an inevitable demise, Raisuqe's night out on the pitch was also about to come to an end.

He was promptly sent off by the referee, who clearly didn't take kindly to being hoisted up in the air.

By the letter of the law, you can't place your hands on the ref. But you could also argue the red card was slightly harsh, and not quite in the spirit of the game.

Either way, while Josaia Raisuqe's evening was one of mixed emotions, his side still held on for the win. Both sides are some way off the top of the Pro D2 table, however, so the referee will probably be the only item lifted above Nevers' heads this season.

This week, the House of Rugby panel invited Dr. Adam White on the show to discuss whether rugby is doing enough to limit head injuries.

popular
The JOE Friday Pub Quiz: Week 227
QUIZ: Name all 50 of these 2000s Champions League players
The Only Way Is Essex star Mick Norcross dies, aged 57
QUIZ: Match The Simpsons quote to the character who said it
Police break up wedding party with 400 guests at school
Deep fake meme lads sing sea shanty that will make you want to abandon your childhood sweetheart and circumnavigate the globe
'Kent variant' of Covid could be 30% more deadly than original strain, PM reveals
You may also like
Rugby
England learn 2023 World Cup fate after fascinating draw
Sport
England Rugby World Cup winner announces he is suffering from dementia aged 42
Sport
Argentina strip Pablo Matera of captaincy after emergence of racist tweets
Sport
Fans to be allowed to attend outdoor sporting events after lockdown lifts
Sport
Nigel Owens opens up on the time he saved a fan's life
Next Page