WATCH: Wayne Rooney's brother scores from inside his own half

Anything Wayne can do...

It can't have been easy for John Rooney, can it? While big brother Wayne was winning Premier Leagues and Champions Leagues or becoming England's all-time leading goalscorer, John's football career has never quite hit the same dizzying heights - permanently in the shadows of his famous older sibling. 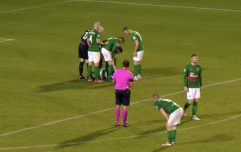 END_OF_DOCUMENT_TOKEN_TO_BE_REPLACED

Even when he does something really good, the media outlets that cover it don't even call him by his name in the headline and include a picture of his brother for the main image on the article. Sorry John, we really are.

A nomadic career has seen the 29-year-old play for - amongst others - New York Red Bulls, Chester and Wrexham. His latest move saw him arrive at Stockport County in the summer.

In action for the Hatters in their FA Cup first round away to Rochdale on Saturday, John emulated his brother by scoring a goal from his own half to set his team on the way to the second round.

Winning the ball on the edge of his defensive third, Rooney lofted the ball over the goalkeeper from a few yards inside his own half to give Stockport the lead over the League One side after just seven minutes.

Alex Reid would add a second soon after, and despite a swift response from Rochdale from Matty Lund, the Conference side held on to a 2-1 victory.

The main talking point afterwards, though, was Rooney's opener. And rightly so. Just look at it:

Stockport County through to the 2nd round of the FA Cup after beating Rochdale, this John Rooney goal gets better every time you see it!pic.twitter.com/V4wQzZg8t9

John Rooney - brother of Wayne - scored from his own half in the #FACup today.

Naturally, we have to point out that Wayne has also scored from his own half a couple of times before. Once for Manchester United away at West Ham, and another against the same opponents for Everton.