Two legends of the game.

Robert 'Bobby' Pires and Clarence 'Clarence' Seedorf have confirmed that they will be participating in this year's Soccer Aid for Unicef game at Old Trafford this summer.

Both of the former players, with over 150 international caps between them, will be running out for the Usain Bolt-led World XI, taking on an England XI featuring Mo Farah and captained by Robbie Williams.

Former AC Milan legend Seedorf scored a hat trick the last time he featured in the charity eventing, as the match finished 4-2 in the World XI's favour. It was also, coincidentally, the last time the England team have tasted defeat.

END_OF_DOCUMENT_TOKEN_TO_BE_REPLACED

In a press release Seedorf said: “I’m back! The last time I played, in 2014, not only did I score a hattrick but the Soccer Aid for World XI lifted the trophy. I haven’t been involved since then and England have won, so what does that tell you?!"

"This is always a game that I look forward to and I think our team is already looking stronger than ever – we want to win again! Most importantly Soccer Aid for Unicef helps children worldwide and that is why I’m only too happy to lend my support."

Excited to announce that I'll be making my @socceraid debut at Old Trafford on Sunday 10th June. A game like no other that will help children around the world! 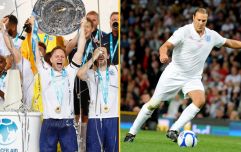 The lineup for Soccer Aid 2021 has been confirmed

END_OF_DOCUMENT_TOKEN_TO_BE_REPLACED

Meanwhile Arsenal icon Pires will be making his debut, and explained: “This is going to be a really special game, so it was very easy to say yes to taking part. Looking at our team, I think we’ve got a great chance and I know that there are more big names to come."

"I’ve got some great memories of playing at Old Trafford from my Arsenal days, so I hope to see lots of supporters coming out to watch us and to raise money for a great cause,” he added.

How will the duo fare playing alongside Gordon Ramsey, who will no doubt be screaming at them for through balls and demanding an intense high-press, remains to be seen.

Tickets for the Soccer Aid for Unicef football match on Sunday 10thJune 2018 at Old Trafford are available now at www.manutd.com/socceraid or by calling 0161 444 2018 with tickets priced between £10 and £50.

popular
Brit on holiday beaten with a brick by gang before being thrown in the sea unconscious
Fears surging covid cases could ruin summer holidays with return of tests and rules
Dad who ran off with Ukrainian refugee says couple are doing 'brilliantly' - but he can't see his kids
Men with ‘very large penises’ wanted for new documentary
Teens are turning up to watch Minions in suits - and why cinemas have been forced to ban them
British schoolboy breaks internet after attending prom in sequined tuxedo ballgown
Premier League player arrested on suspicion of rape facing two more allegations
You may also like
Sport
Everyone is calling for goal-line technology after Usain Bolt's shot bounces on the line
Sport
WATCH: Clive Tyldesley goes full Alan Partridge while commentating on Soccer Aid
Sport
Everyone is saying the same thing about the Soccer Aid pitch
Football
Bitterly disappointed Soccer Aid fans react as they realise Jonathan Wilkes won't be playing
Sport
Eric Cantona joins Soccer Aid World XI
Next Page