Robbie Keane has been without a club since his contract with LA Galaxy expired in November.

However, the Republic of Ireland's record goalscorer and appearance holder has no plans to retire just yet

"I look towards the next chapter of my playing career," Keane wrote in his farewell message to the LA Galaxy fans.

"I still feel as fit and sharp as ever and I am looking forward to my next adventure. Having now retired from international football I am ready to focus everything I have on one last major challenge in club football."

Wherever the 36-year-old ends up scoring goals next, we doubt it'll be for Preston North End.

END_OF_DOCUMENT_TOKEN_TO_BE_REPLACED

The Championship club have been linked with a move for Keane. However, according to the Lanchasire Evening Post, the club are unlikely to be able to meet Keane's wage demands. 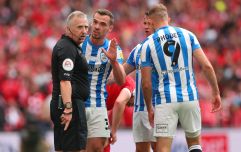 END_OF_DOCUMENT_TOKEN_TO_BE_REPLACED

It's hard to imagine Keane swapping the bright lights of Los Angeles for a stint slumming in the Championship at this stage of his career. Preston also have one of the smallest wage budgets in the division, and would be unlikely to break the bank for Keane.

A return to Major League Soccer, or the Australian A-League, or maybe even a spell in China, are arguably more likely options for Keane than the rough and tumble of the Championship.

However, stranger things have happened and Preston fans want it to happen.