Richarlison spots young fan outside his house, gets him a shirt and signs it

Everton signed Richarlison de Andrade from Watford back in 2018 and it's safe to say, not only is he one of their best players, but he's a fan-favourite for all the right reasons. 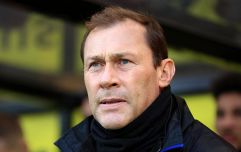 END_OF_DOCUMENT_TOKEN_TO_BE_REPLACED

Whether it's pulling out that daft pigeon dance, visiting fans in hospital, or winding up the opposition, Toffees and neutrals alike have taken a shine to him.

His latest act of goodwill saw him spot a young fan walking past his house. Clearly idolising the 23-year-old winger, Richarlison waved back at Charlie before quickly shouting, "Wait, I'm bringing him a shirt!". What a ledge.

Charlie's mother, Rosemary, was just as made up as her son and aside from noting how "kind and genuine" he was, she also mentioned how valuable his act of generosity was: "I feel like this is the kind of spirit everyone needs to hear at the moment. I thought it could bring a smile to people's faces."

END_OF_DOCUMENT_TOKEN_TO_BE_REPLACED

We've always known Richarlison was a wholesome guy and a family man, at that. It was only back in 2018 when we saw that touching video of him finding out he had been selected for Brazil's Copa America squad, surrounded by his loved ones. It still sends tingles down our spine, it really does.

There are plenty of footballers who go out of their way to do acts of good and make someone's day special, but we can always do with more of them. Good on you, Richi.