It's early days yet, but in his first couple of games for Everton, Richarlison has shown plenty of promise. 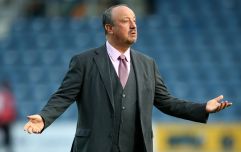 END_OF_DOCUMENT_TOKEN_TO_BE_REPLACED

Signed from Watford for £40m, the Brazilian marked his debut with a brace at Wolverhampton. He scored again during his first game for the club at Goodison Park, a goal that proved to be winner against Southampton.

His third game, however, didn't quite go to plan. Away at Bournemouth, Richarlison was shown a straight red card after an incident involving Adam Smith shortly before half-time.

Footage (which we're not permitted to use) shows Richarlison exchanging words with the defender as Leighton Baines prepares to take an Everton throw-in.

The pair are soon face-to-face, and Richarlison leans his head towards Smith

Contact is minimal, but after a split second, Smith holds his head...

... and begins to appeal to the referee

Although the sending off was undeniably soft, Richarlison's decision to move his head towards Smith presented the referee with no choice. Rules are rules and Everton will now be without their star man for the next three games.

It also came as bad news for the many FPL players who had opted to stick him in their team following his early season form...

Richarlison has completely ruined my fpl.

LOL at my life!
I put Richarlison in my FPL this morning! #FPL

Red card Richarlison, my FPL up in flames!