Shockingly, it's not Kylian Mbappé

Cristiano Ronaldo's move from Real Madrid to Juventus came as a shock to the footballing world, and a huge disappointment to Real Madrid fans. It's never easy to lose your greatest all time goalscorer, but the optimist would see it as an opportunity to begin a new era. They are now entering a transition period. Out with the old, in with the new.

As is tradition, the Spanish newspaper MARCA have published a poll, allowing Madrid fans to vote on who they would most like to replace Ronaldo. The results are in, and may come as a surprise.


No, it turns out Madrid fans would most like Tottenham and England striker Harry Kane to replace Cristiano Ronaldo. Ever since he broke through into Tottenham's first team, scored a few goals and didn't stop, he has also been lossely linked with a move to Madrid. His complete skillset caught the eye of Los Blancos' fans, and his six goals at the World Cup will only have made him more popular among them. 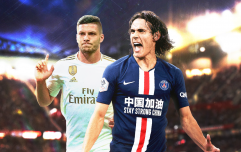 END_OF_DOCUMENT_TOKEN_TO_BE_REPLACED

Possibly the biggest surprise from the poll is that former Madrid forward Mariano Diaz, who now plies his trade at Lyon, got 12 per cent of the votes. Madrid fans appear to think that they let him go too early.

Their wish to buy Harry Kane is unlikely to be realised in the near future, but should Spurs go another two seasons without a trophy, who knows?


popular
Dean Henderson makes another David De Gea-esque save
Cruel Ousmane Dembélé video goes viral with Manchester United fans
QUIZ: Match the quote to the It's Always Sunny in Philadelphia character #2
FootballJOE's Badge Quiz - #2
Why Erik Lamela wore odd boots against Chelsea
Macclesfield Town stadium for sale for less than a London house
QUIZ: Can you guess the Playstation 1 game from the picture?