Turning down Manchester United was a "difficult" decision for Raphael Varane, but the Frenchman believes he made the right choice.

The Real Madrid defender was linked with a move to Old Trafford during the summer transfer window in a move that would have seen him reunite with his old boss Jose Mourinho. 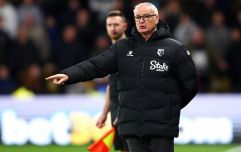 END_OF_DOCUMENT_TOKEN_TO_BE_REPLACED

Prior to signing promising youngster Eric Bailly from Villarreal, Varane was singled out as a player who could come straight into the Red Devils first team in order to shore up their defence. Suddenly, he started garnering a lot of inches in the transfer gossip columns.

Varane hinted in an interview with Canal+ that the move did tickle his fancy but after weighing everything up, he made up his mind to stay and hasn't looked back since.

"Of course it's flattering. Manchester United are a very big club. But from the moment when Madrid and I are in sync on my project, there's no questions to ask yourself."

"I have always said I feel good in Madrid. It's not easy to say 'No' to Jose Mourinho, but you have to weigh up the pros and the cons. We're men, we have decisions to make and that's how it is."

Ultimately, it was Zinedine Zidane's vote of confidence that convinced him to stay put at the Bernabeu. The Madrid boss played a pivotal role in bringing him to the Spanish capital five years ago and Varane still clearly feels a sense of loyalty towards his compatriot.

"It was really that trust, that support which was important for me, and when I was reassured on that point, there was no question of it any more."

popular
Pierce Brosnan has the perfect response to trolls who attack wife's weight
Chelsea forced to change Stamford Bridge changing room after Liverpool complaint
Woman stabbed to death before knifeman run over and killed as driver ‘tries to save her’
Katie Price could be jailed for five years after arrest on Friday
Hero Jordan Henderson tries to prevent Liverpool fan from taking shirt off child
TikTok star Jack Wright accuses Sienna Mae of sexual assault
Six people reported dead in a crush outside Cameroon-Comoros AFCON game
You may also like
Sport
Roy Keane wary of 'Klopp coming after me' following Liverpool comments
Sport
Premier League clubs to consider legal action if postponement rules change
Sport
Premier League footballer arrested on suspicion of child sex offences has bail extended
Sport
Premier League to consider changing rules on covid postponements
Sport
QUIZ: How many of the most successful football teams can you name, without making a mistake?
Next Page