The malaise continues at Old Trafford, and Man United seem incapable of shaking themselves out of it

Under Ole Gunnar Solskjaer, Manchester United often went in 0-0, or 1-0 down, at the break only to get their act together in the second half. Despite a number of comebacks and late goals, it was never going to sustain.

END_OF_DOCUMENT_TOKEN_TO_BE_REPLACED

So it proved when a few slow starts could not be turned around and Solskjaer was sent packing.

Ralf Rangnick came in as caretaker manager for over half a season and has sought to add more control and ball-pressing to United. There have already been peaks and troughs under the German, but their latest habit is no less frustrating for their fans.

For the third game in succession, United went 1-0 ahead only to squander the lead and fail to bounce back. This run has cost them a place in the FA Cup and is damaging their hopes of finishing in the league's top four.

The post-match comments from Ralph Hasenhüttl, after his side scored in the second half to secure another decent away result, shows how United have been well and truly figured out. 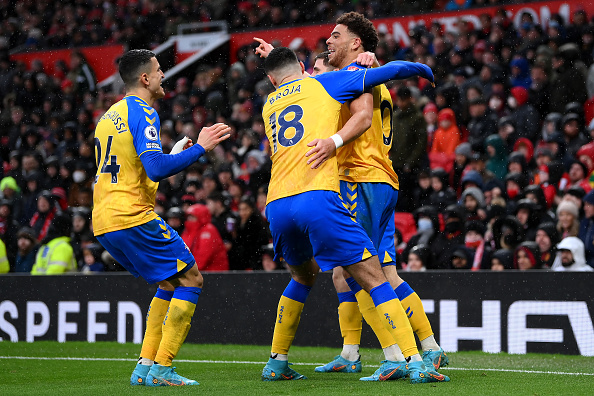 Manchester United were clearly the better of the sides in the opening 30 minutes and should have been further ahead than the 1-0 lead Jadon Sancho gave them when Marcus Rashford teed him up for.

END_OF_DOCUMENT_TOKEN_TO_BE_REPLACED

In the final 15 minutes of the first half, the Saints gave notice that this would not be another 9-0 thumping at Old Trafford. Adam Armstrong had their best chance to equalise, while Ché Adams slipped inside the six yard box to let United off the hook.

After blowing 1-0 leads to Middlesbrough and Burnley, the half-time talk for the hosts surely focused on being more clinical in attack and, out of possession, keeping shape to protect the lead. Instead, United were slow to press and Diogo Dalot was sucked out of the back four. Adams was slipped through, Raphael Varane was in two minds and Adams made it 1-1.

There were still over 40 minutes to play, but it was Southampton that had the better chances to win. If midfielder Stuart Armstrong and Armando Broja had more composure in front of goal, it could have been a comfortable away win.

Hasenhüttl played with two strikers - Broja and Adams - up high and United were caught on the counter on numerous occasions. Harry Maguire twice got lost, over on the left wing, while Luke Shaw was getting out-paced by all-comers. Dalot's positional sense often let him down while Varane must be wondering what he signed up for.

Following the game, which ended 1-1, the Southampton boss made a comment about hitting United on the counter than even their most blinkered of fans could not deny.

He said: "It is not a big secret that when they lose the ball that the reverse gears are not the best from everybody."

Get United on the back foot, says Hasenhüttl, and their entire back four and midfielders are susceptible to being opened up. Do not worry about the forward trio, whoever United have out there, because they are non-factors.

While this appraisal is clearly correct for anyone who's watched even a few moments of United in recent months, it angered Match of the Day pundit Jermaine Jenas, who said the Saints coach should have stuck to talking about his own side.

"He’s had such a great week so he should focus on that and what his team are doing. I get that he’s got that relationship with Ralf Rangnick but it didn’t sit right with me, talking about another team, especially when they’re going through a tough period."

Rangnick is now resembling a man called in to do the dirty work, while trying to sneak into the Champions League places. Players are being cleared out to give the new manager some flexibility in the summer.

The worry, unless these players can somehow find a spark or take some pride in what they do, is that the new manager will be inheriting a Europa League side for 2022/23.