You wouldn't have blamed Rafael Nadal if he'd wanted to make a swift departure from Wimbledon on Monday evening.

The Spaniard, a two-time champion in 2008 and 2010, had found himself two sets down to Luxembourg's Gilles Müller. Despite this, the fourth seed battled back to take the third and fourth sets. At this point, most watching the game - both on television and in the Court One crowd - would have backed Nadal to get the job done in the final set and book his spot in the quarter finals. 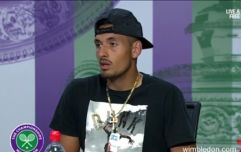 END_OF_DOCUMENT_TOKEN_TO_BE_REPLACED

That, however, wasn't to be.

Not only did he go on to lose the final set (13-15), he did so after a staggering two hours and fifteen minutes.

As he returned to his chair to pack away his racket, many would have expected a bitterly disappointed Nadal to head straight for the changing rooms. Instead, he chose to remain, waiting for Müller so that he could accompany his opponent off the court. Not only that, he even took time to sign a few autographs before eventually making an exit.

As the footage below shows, his reaction to the defeat brought a huge ovation from those that were there to see it.

A perfect example of being gracious in defeat...

popular
British teen says she was raped in Majorca hotel by 'famous actor and musician'
Amber Heard is now being investigated for perjury
Bette Midler wants the US to ban Viagra because it’s ‘God’s will’ to have a ‘limp d**k’
Radio station plays 'Killing in the Name' non-stop from 6am after multiple staff get fired
Supermarket cracks down on people breaking off broccoli stems to save money at the till
A definitive ranking of every swear word from worst to best
Nadine Dorries has done it again, this time mistaking rugby league for rugby union
You may also like
News
Wimbledon to drop Mrs and Miss on women’s honours board to match men's titles
News
Tokyo Olympics: Italy's Lamont Marcell Jacobs wins shock gold in 100m final
Sport
Emma Raducanu explains retirement decision after scathing McEnroe criticism
Sport
18-year-old Brit Emma Raducanu reaches last 16 at Wimbledon
Sport
Andy Murray slams governments over 'pathetic' NHS pay-rise in Wimbledon post-match
Next Page