After arguing with fans for 7 years, Piers Morgan has one final Arsene Wenger meltdown

You know what they say, the hottest love has the coldest end.

Or is that just Socrates who says that?

'The hottest love has the coldest end' - Socrates. pic.twitter.com/CdKp8qupl0

For the last seven years, Piers Morgan has been blue in the face, firstly calling for any kind of critical analysis of Arsene Wenger's performance, and then just relentlessly calling for his head.

In the beginning, he was ostracised by the ostriches, the herds of of loyal followers he was urging to come out from the sand and see what the hell was happening to the club. That was 2012. Since, he has become just a number of the Wenger Out movement but a pretty prevalent number and, despite being ignored for so long, a persistent one.

The rabid Arsenal fan began to ask questions - publicly at least, or on social media anyway - around the 2011 mark and, even though Wenger would go on to clinch three FA Cup titles and three more Community Shield trophies in that time, Piers Morgan wasn't conned.

He wasn't thrown by nostalgia or the slaying of Hull or Villa in FA Cup deciders. He could see Arsenal were in decline but perhaps none of us thought they'd end up here. However anyone raising eyebrows was also getting more restless just looking around the continent and seeing the job that other managers were doing and the possibilities that were there for one of the biggest clubs in England.

In fact, Piers Morgan, in fairness to him, had been saying Arsenal should hire Jurgen Klopp since 2012. Three years before he left Dortmund.

Klopp's everything I said he'd be. But Arsenal fans ridiculed me when I demanded he replace Wenger. https://t.co/8C6kT7P2RO

And it wasn't a knee-jerk reaction to the annoying sight of Wenger's long coat either.

This has nearly been as persistent as Wenger Out.

Jurgen Klopp would be the perfect next manager for #Arsenal - fact.

Arsenal needs Usmanov, Dein and a young, hungry manager like Klopp to build a new team that can compete at the highest level again.

All the way back to nearly three full years before Liverpool hired him.

Klopp won Group of Death with his superb Dortmund team. I repeat - this man would be the perfect manager for Arsenal.

Wenger out, Klopp in. Come on Arsenal fans - make it happen. 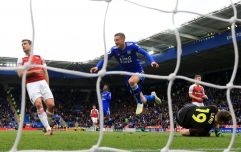 END_OF_DOCUMENT_TOKEN_TO_BE_REPLACED

Piers Morgan hasn't been afraid to praise Wenger on the rare occasions he felt the manager deserved it. In October 2015, Arsenal beat Bayern Munich 2-0 in the Champions League group stage and the Englishman was full of adoration for how the team was set up and how they approached the tie. Of course, two weeks later, they lost 5-1 out in Bavaria but, hey, it was a fun two weeks.

You see, Arsenal fans have grown weary. They don't trust the good times anymore because they know reality is just around the corner.

There used to be a different way though, a different time, and it seems that we can trace Piers Morgan's blissful happiness and peak Twitter support of Arsene Wenger back to February 2011.

My final word on Arsenal tonight: There's only one Arsene Wenger.

But even that didn't make it past two months.

I love Arsene Wenger, but he's beginning to sound worryingly defiant about not winning anything #nopointsforsecondplace

And, by the end of that year, he was starting to simmer and calling for arms - if not to execute the French native, but at least put him on trial.

This is one of the most depressing games I have ever watched. Wenger's lost the plot. #Arsenal #Shambles


To all #Arsenal fans claiming we'd be 'worse off' without Wenger, IS there a worse off then losing 8-2 to United after 6 trophy-less years?

The blind deluded non-critical devotion to Wenger by so many #Arsenal fans is one reason we're in this mess. Heads up, ostriches.

Then, it just spiralled.

Has Wenger resigned yet?

2013 was probably the last real time that a burst of Arsenal form really fooled everyone. They've had 'next year could be the year' columns since, of course they have, but the start of the 2013/14 season had even Piers Morgan believing.

The once-glorious Wenger era is OVER. Just accept it, #Arsenal fans, deal with it, move on. Let's go win trophies again.

It's perfectly logical to have wanted the Wenger who sold RVP to Utd fired, and the one who bought Ozil kept on. He changed, not me. #Afc

Cheerful wordplay (enjoy it while it lasts).

If Wenger truly cares about Arsenal, then he must resign. #afc

For 8yrs I've been saying Wenger's lost it.
For 8yrs Arsenal fans have told me to shut up. 😷😷😷😷

Alas, Piers Morgan got his wish. Wenger decided to part ways with the club and issue a few parting shots at the fans on the way but, even after all those years of falling way short of expectation, there was still time for one final Europa League letdown.

And, perhaps for the last time, the chief of the Wenger Out brigade, Piers Morgan, provided another pissed off assessment.

So Wenger fails to win a European trophy for the 22nd consecutive year.
And we'll end up 6th in the League, his worst finish in 22 years. (Last year was his previous worst..)
The harsh truth is he stayed way too long & wrecked his legacy. #afc pic.twitter.com/lfZjsFuSpo

An old football foe of Piers Morgan's down through the years, Spurs man Alan Sugar, has always jumped to the defence of the Arsenal manager - you might call it the most extreme and cunning form of trolling.

The pair will have more spats in seasons to come but they gave their Wenger back-and-forths a last hurrah on Thursday night too.


Great you are so positive. When was the last time a special award was given out by Sir Alex and Mouhrino in recognition of the PL 2nd best ever manager . You ungrateful cretin https://t.co/o7fhuaP5MQ

That wasn't doing anything to appease Morgan though who saw the reception at Old Trafford as the final insult.

They gave him a flower vase.
For services to not winning the Premier League for 15yrs & never winning the Champions League. https://t.co/61KJYQgGcq

And, just like that, Wenger really is out. Seven years later. Rest easy, Piers.