If this seven-year-old's letter to Inverness Caledonian Thistle doesn't brighten up your day, you might want to consult your GP about that lump of coal in your chest cavity.

The Scottish Premiership side are without a manager following the departure of John Hughes at the end of the season. 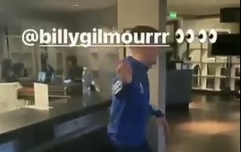 END_OF_DOCUMENT_TOKEN_TO_BE_REPLACED

With the search for a new boss continuing, seven-year-old die-hard Inverness fan Ewen MacKenzie decided to throw his hat into the ring. The schoolboy sent his beloved club a handwritten letter applying for the role.

We know what you're thinking, Ewen's school commitments would mean that he would be unable give the job the attention it deserves. Well, as he explained in the letter, he should be able to manage the extra workload 'as long as the players chip in and help me with my homework'. 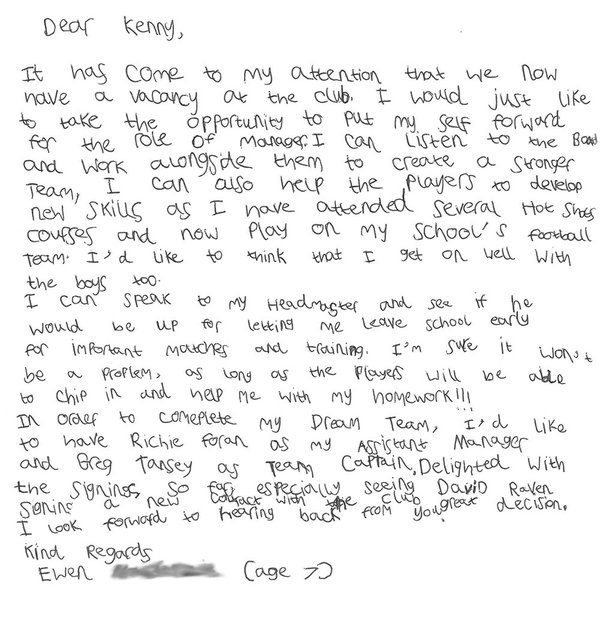 Unfortunately, Inverness were unable to look past Ewen's school commitments, but the club made sure to respond to his application by offering some words of encouragement for the young man. 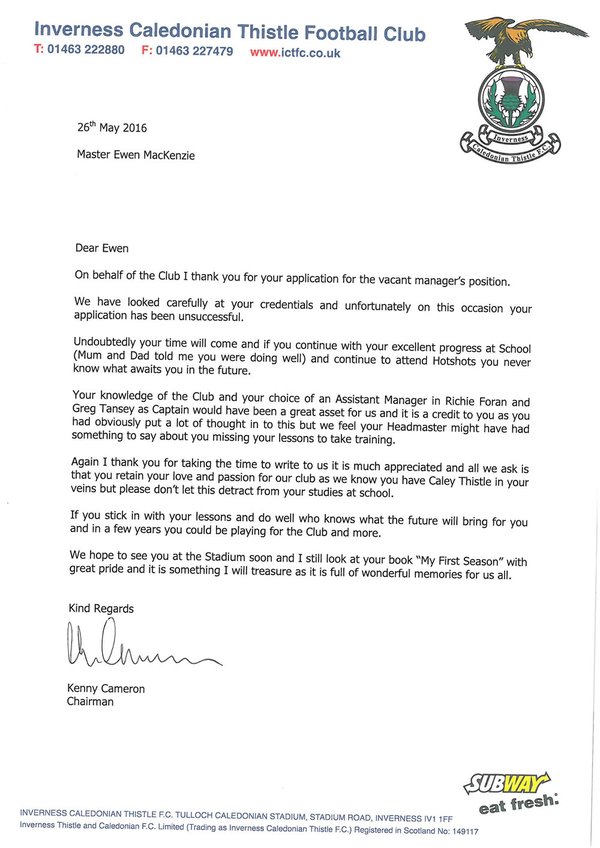 Keep trying Ewen. Who knows? Things might not work out with the next manager, you could be in with a shout for the job next season.

popular
Here we go again - the government says book your Xmas party. What's 'Plan B'?
Gordon Ramsay's daughter Tilly calls out radio host for 'fat shaming' her live on air
Matt Lucas hits back at outrage over 'offensive' Bake Off German accent
Mum who drove into Insulate Britain in rage says 'I just gave them a nudge'
FIFA to look at preventing teams from competing in consecutive World Cups
Watford staff unhappy with Ben Foster's commitment to vlogging on club time
Passengers who allegedly filmed rape of woman on train unlikely to be charged
You may also like
Sport
England and Scotland fans flimed fighting after "we hate Scotland" chants
Sport
Billy Gilmour called his Nana after Wembley masterclass
News
Scotland fans help with clean-up in Leicester Square as Tartan Army leaves London
Football
Nicola Sturgeon praises Scotland team for choosing to take the knee alongside England
News
Boris Johnson finally tells England fans to 'cheer, not boo' when players take the knee
Next Page