A year ago, the Brazilian was tipped to feature more regularly under Jose Mourinho having spent the previous season on loan in La Liga with Granada. Eager to secure frequent first-team football, he opted for a second season-long loan spell in Spain, this time with Valencia.

In his absence, Mourinho gave playing time to Scott McTominay during last season - selecting him for big games including the Champions League away leg against Sevilla.

With United now preparing for their pre-season tour of the United States, Pereira has revealed he's spoken to Mourinho about his future at Old Trafford, which some had suggested was in the balance.

"I told him that I felt ready to compete," he told Belgium newspaper Het Belang van Limburg.

"He was happy to hear that and said I would get my chance. Now we will see how it goes in pre-season. Then we are together again, but of course I hope to convince him." 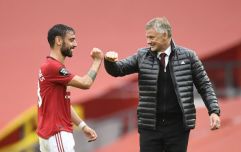 END_OF_DOCUMENT_TOKEN_TO_BE_REPLACED

Born in Belgium, Pereira joined United's youth set-up in 2011. He made his first competitive start for their first team in a League Cup game against Ipswich Town, marking the occasion by scoring a free-kick.

Making absolutely sure that he intends to stick around at United, he added: "Breaking through at Manchester United is and remains the big dream."

As well as the emergence of McTominay, Pereira's route to a first-team spot may have been complicated by the signing of Fred, another central midfielder, from Shakhtar Donetsk.

United kick off their pre-season tour in Los Angeles, where they will take on AC Milan on July 26. They'll face Liverpool in Michigan two days later, and also take on Real Madrid in Miami on August 1.

United kick off the new Premier League campaign at home to Leicester City on August 11. Their first away game of the campaign comes at Brighton a week later.


popular
A definitive ranking of every swear word from worst to best
Roy Keane blames Jesse Lingard clothing line launch on weak United dressing room
The UK's Top 20 biscuits have been revealed...
PlayStation and Xbox users will now be able to play against each other online
Here's how to recover all your deleted Facebook photos and messages
Strong Zero: The Japanese 9% ABV low-cost cocktail in can that is becoming a cult favourite in the West
I watched an episode of Naked Attraction and these are my findings about humanity