With Manchester United seemingly blowing their chances of Champions League qualification with their draw at home to Chelsea last weekend, more reports have claimed Pogba wants to leave Old Trafford for a second time, with Real Madrid said to be his preferred next destination.

Following this, Pogba's brother, Florentin - despite doing his best to remain tight-lipped during an interview with AS - appears to have hinted that his younger sibling may be set for another big money move in time for next season.

The defender, who now plays in Major League Soccer for Atlanta United, was asked several questions about his brother by the Spanish outlet.

Although the majority of his responses were vague, he seemed to suggest a move to Real Madrid may be possible when asked about how important Zinedine Zidane might be in persuading him to move to the Bernabeu.


"What about Zidane, who tried to sign him before he went back to United, could that be important?" he was asked. 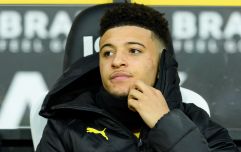 END_OF_DOCUMENT_TOKEN_TO_BE_REPLACED

"I could tell you one thing today and another thing tomorrow," Florentin replied.

Asked what he thought today, he said: "Things are going to happen. Summer’s coming. We’ll see if he stays, if he goes…"

Adding that the pair had last spoken two days ago, he also appeared to suggest the former Juventus player would have the final say on where his future lies.

Pogba is expected to feature for United as they take on already-relegated Huddersfield Town on Sunday afternoon. They must win the game and hope Chelsea and Arsenal fail to win their games to give them hope of a top four finish.

United's final game of the season comes at home to Cardiff City next weekend.


popular
Jadon Sancho to Manchester United transfer believed to be very close
Antonio Conte likely to leave Inter Milan after just one season
A must-see Jurgen Klopp documentary on Channel 4 this evening
It was Pierre-Emerick Aubameyang's final but Emiliano Martinez's moment
How to find out which restaurants near you are participating in Eat Out to Help Out
The JOE Friday Pub Quiz: Week 202
Footballers to be sent off for coughing on an opponent under new rules