He will miss Saracens' crunch Champions Cup clash against Leinster

England captain Owen Farrell has been handed a five-game ban following his sending off against Wasps.

Farrell was given his marching orders following a horror tackle on Wasps' teenage scrum-half Charlie Atkinson, and could have no complaints with the subsequent red.

Wasps' Jimmy Gopperth converted the resulting penalty to make the score 18-15, and defeat for Sarries was confirmed when Tom Willis went over for a try in the 70th minute.

END_OF_DOCUMENT_TOKEN_TO_BE_REPLACED

Farrell could be heard through the referee's mic muttering the words "I know that was bad". Despite his protestations, the general consensus is that it is Farrell's lowest point as a professional.

He has often been criticised for his tackle technique, particularly his tendency to lead with the chest and shoulders instead of wrapping the arms.

Well, he did wrap this time. It just happened to be around Atkinson's neck.

Farrell took time to apologise to Atkinson for his tackle before the Wasps scrum-half received treatment on the sidelines.

Owen Farrell apologises to Charlie Atkinson after being sent off. (Photo by Clive Rose/Getty Images) 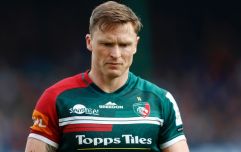 END_OF_DOCUMENT_TOKEN_TO_BE_REPLACED

"It's a really bad one. I can't defend that. We know Owen Farrell plays hard - he plays on the edge - but that is bad.

"He will get a lengthy ban. We know it has been a problem for Owen because of his tackle height. He's walloped him high. He knows that he has completely mis-timed his tackle. I'm not sure quite what he's aiming for there."

Dallaglio predicted a lengthy ban, and the disciplinary has duly handed Farrell one. He has been ruled out for five games, meaning he will miss Saracens' games against Sale, Exeter and, crucially, Leinster in the Champions Cup.

The Champions Cup is Saracens' last chance to end the season on a positive note, following their relegation for financial irregularities.

popular
Lip readers analyse what Johnny Depp’s lawyer told him as they celebrated in court
Genius lettuce hack 'puts people to sleep in seconds' - and people swear by it
Erik ten Hag terminates contract with Ajax early to start work at Man United
Liverpool and Chelsea fans go viral after bizarre FA Cup final confrontation
Brits hilarious reactions to UK’s record-breaking Eurovision performance as Ukraine wins song contest
Weird 'blacked out' island on Google Maps sparks wild conspiracy theories
A definitive ranking of every swear word from worst to best
You may also like
Sport
"I love living here" - Trojans RFC and one of the world's most scenic places to play rugby
Sport
"You are talking like we were blown away" - Ellis Genge bristles after Leinster loss
Sport
Maro Itoje makes shoot-out suggestion after incredible end to Munster vs. Toulouse
Sport
'We get to see where we're at against the best team in Europe, if not the world' - Steve Borthwick
Sport
'Every dog has their day' - Ellis Genge relishing resumption of Tadhg Furlong battle
Next Page