What a batshit game of football

Leandro Trossard was unfortunate not to score in the game, hitting both posts and the bar. United, meanwhile, got their fair share of luck in the dying moments, being awarded a penalty after the full-time whistle had been blown.

Speaking after the game, Solskjaer acknowledged Brighton's misfortune after hitting the woodwork so often, and joked: "First of all we have to be thankful José [Mourinho] isn’t here to measure the goalposts, otherwise we’d have been in trouble."

The Man Utd boss got a fright during his chat with @TheDesKelly after Brighton gave his team a fight on the pitch.

Some pluses, but work to be done for Man Utd. pic.twitter.com/Sul9cspWQN 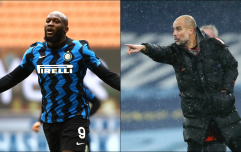 END_OF_DOCUMENT_TOKEN_TO_BE_REPLACED

For those who missed the Mourinho story midweek, the Spurs boss posted photographs of himself standing underneath the bar at Shkendija's stadium in northern Macedonia, highlighting that they were five centimetres lower than the regulation measurements.